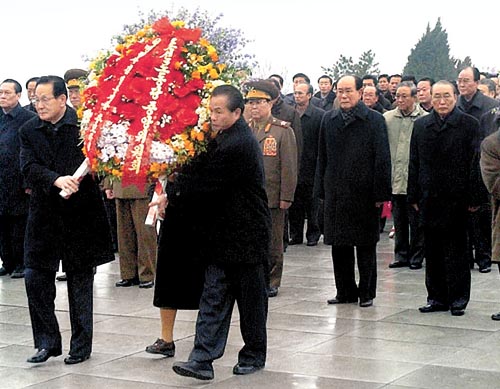 Senior officials of North Korea’s Workers’ Party, cabinet and the military offer flower wreaths last Friday to commemorate the centennial of the birth of Kim Il, former No. 2 man in the North Korean hierarchy. [YONHAP]


North Korea has once again stressed the importance of and justification for a direct-lineage family succession, government sources said here.

North Korean last Friday held a ceremony to commemorate the centennial of the birth of Kim Il, former No. 2 man in the North Korean hierarchy and independence fighter against Japan, according to a source.

The source said Pyongyang’s Korean Central News Agency broadcast the event. In a speech, Yang Hyong-sop, vice president of the Presidium of the Supreme People’s Assembly, relayed Kim Il’s words that, “We are all so lucky to have Kim Jong-il as the leader and our future lies in our loyalty to future generations of the Kims.”

Kim Jong-un, third son of Kim Jong-il, is seen as the likely next head of North Korea, though there have been reports that other, more senior government officials, would take over. One analyst in Seoul said Yang’s speech indicated that handing over the reins to the junior Kim may soon take place. “With the emphasis on the loyalty to the Kim family, it is clear that the North is seriously considering family succession,” the analyst said.

Last October, a song titled, “Footsteps,” was played at a performance attended by Kim Jong-il, with lyrics aimed at encouraging loyalty toward the younger Kim. In February this year, North Korean missions overseas were told to prepare for a leadership change in Pyongyang.

And Kim Jong-un’s birthday, Jan. 8, has been designated as the “largest holiday of the nation,” the second-highest distinction for red-letter days in North Korea. Won Sei-hoon, head of the National Intelligence Service in Seoul, has said Kim Jong-un has taken on larger responsibilities in the North government and had started getting his hands on policy-making process.

One government official in Seoul said that “the event appears to have been designed to eliminate any lingering doubt surrounding the government, rally the public, and solidify the regime ahead of the succession.”