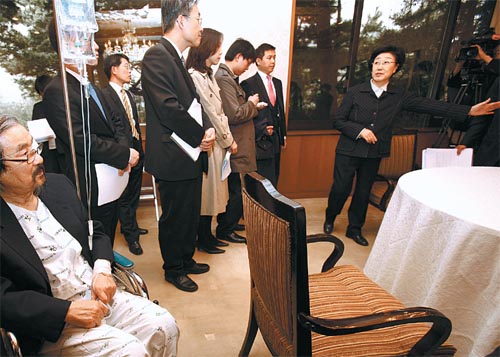 A re-enactment for a criminal trial takes place for the first time at the prime minister’s residence in Samcheong-dong, Seoul yesterday while the accused former Prime Minister Han Myeong-sook, right, and the witness, former Korea Express CEO Kwak Young-wook, in the wheelchair, attended. [Joint Press Corps]


The prime minister’s residence in Samcheong-dong, central Seoul, was the scene of a re-enactment for the criminal trial of former Prime Minister Han Myeong-sook yesterday.

It was the first time a crime re-enactment had taken place at the prime minister’s residence.

Last December, Han was indicted for allegedly taking a $50,000 bribe from former Korea Express Chief Executive Officer Kwak Young-wook in 2006 in return for helping him get a job.

Prosecutors have said that Han received two envelopes stuffed with the loot at a luncheon in 2006 at the Samcheong-dong residence.

With the permission of the prime minister’s office, an area in the residence was recreated to look exactly as it did during the luncheon that was held Dec. 20, 2006.

In attendance yesterday were Han, Kwak, the prosecution, bodyguards and several others who were present at the event in question.

During yesterday’s proceeding, members of the prosecution re-enacted the scene in which Kwak would have placed the two envelopes, following Kwak’s directions.

The luncheon was also attended by current Democratic Party leader and then-Commerce Minister Chung Sye-kyun as well as then-Minister of Construction and Transportation Kang Dong-suk.

The main focus of the re-enactment yesterday was the last part of the luncheon when participants stood.

Kwak has said during the trial that at the luncheon, participants all left simultaneously except for Chung and Kang, who went out before everyone else.

Kwak said that afterwards, only Han and he were left in the room and that he then placed two envelopes on the chair.

However Han’s lawyer has been arguing that at these sorts of luncheons, it was usually Han who stepped out of the room first.

Before the re-enactment, the prosecution verified that the path leading to the luncheon room was exactly like it was back in 2006.

Han arrived at the Samcheong-dong residence a little before the re-enactment started along with her lawyer. “It has been a long time since I have been here,” she said, saying to her lawyer that most of the things looked like they did before.

The re-enactment was initially planned to last an hour but ended up taking three hours. The judges trying the case plan to review the re-enactment, and the examinations of former Vice Commerce Minister Lee Won-gul tomorrow and Chung Sye-kyun on Friday. A verdict is planned for next Wednesday.

Han served as prime minister from April 2006 to March 2007 during the Roh Moo-hyun administration and was often depicted as a symbol of integrity during her term.

The trial opened earlier this month and Han pleaded innocent to all bribery charges.

Meanwhile, Kwak, who had initially told prosecutors late last year that he personally gave Han $50,000 in the two envelopes, changed his testimony March 11 when he took the witness stand. He said that he “left the envelopes on a chair in the dining room after the luncheon.”