Golfing prodigy swings for the stars

Golfing prodigy swings for the stars 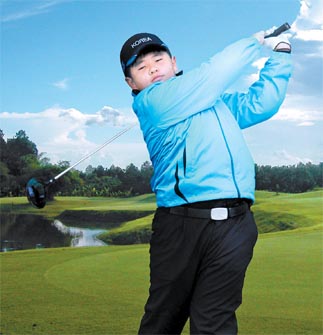 Thirteen-year-old golf prodigy Suh Hyoung-suk poses in front of a photo of a golf course in Thailand. By Kim Sang-seon

A spring breeze was blowing hard as I drove to meet a 13-year-old golf prodigy, but I didn’t mind the drive. It was worth the trip to Cheonan, South Chungcheong to meet the child golfer who dreams becoming the next Choi Kyung-ju.

The rising star is Suh Hyoung-suk. Selected as a backup national athlete for two years in a row, he has won nine consecutive competitions held for male elementary school students.

Suh swept nine of the 11 junior golfing championships as just a sixth grader at Seo-2 Elementary School in southern Seoul. The competitions tested not only his innate ability, but his physical condition and ability to meet the demands of each day’s weather.

As the news blew through the golfing community, people started talking about the arrival on the scene of “a whiz kid who’s talented enough to be the next Choi.”

“I’ve been participating in tournaments since I was a first grader, but I still get tense,” he says. “My hands still sweat and my heart pounds during competitions. But I enjoy the feelings.”

After finishing elementary school in Seoul, he enrolled in a middle school in Cheonan, where his golf academy is located, in order to save time.

Suh’s father credits the boy’s “strong will to win,” but the young golfer himself says the secrets of his success are putting and practice.

“I think I do better in putting than my peers. I can make a birdie by just one putt from four or five meters [13 or 16 feet] away,” he says.

“I make the hole seven times out of 10 because I always practice more than three hours a day. I’m particularly good at lining up a putt.”

The skill gives him good odds on the green.

“When I was in winter training in Australia last year, I won lots of putting bets,” he says.

“Suh has a poker face. There’s no change in his expression when he plays golf,” said Lee Jeong-yoon, who manages the driving range Woo Jeong Hills.

Lee has been watching Suh for several years.

“Suh is an early bird,” he says. “He begins practicing earlier than any of the other trainees at the golf academy, and he is the last to leave. He never skips a practice regardless of the weather.”

Suh held a golf club for the first time when he was just 5 years old, in 2002. He and his mother, Park Young-mi, went to the driving range, and that mere chance brought him into the golf world.

His mother says, “I let him hit a golf ball just for fun, but he hit about 10 boxes of balls that day.” He started to take golf lessons the following year, when he was 6.

And he’s already shot three holes in one.

“My goal for this year is to be the No. 1 among male middle-school students. And for the year 2014, when I’ll be in my second year of high school, I want to take part in the Incheon Asian Games as a member of the national team and win a gold medal,” Suh says.

“I’m also thinking of participating in the Olympics, but as a golfer it would be more prestigious to win the Masters Golf Tournament. Still, I’ve got a long way to go.”

Suh says that the Korean-American PGA Tour member Anthony Kim, his adviser for the last year, once told him “Set up a goal and step toward it. Then your dreams will come true.” Suh has taken those words to heart.

European golf prodigy Rory Mcilroy is Suh’s favorite player for his nice swing. And the young Korean used to admire the king of golf, Tiger Woods, but not anymore.

But the comparisons still hark back to Choi, who won his first professional tournament at the Korean Open when he was just 16. In 2002, he became the first Korean to ever win the PGA Tour, and he once ranked No. 5 in the world.

Suh is just teeing off on what should be an equally long career. With such a fearless attitude, there’s a good chance he could become the next Choi.