A magical eye for buildings in masks

A magical eye for buildings in masks 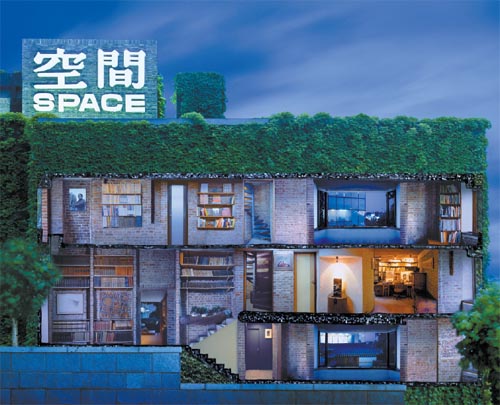 Among the grotesque denizens of Halloween Town in the stop-motion musical, “A Nightmare Before Christmas,” are three evil trick-or-treaters. The three kids wear masks that look exactly like their real faces.

Well look out, because right now, across the world, entire buildings are getting “disguised” in the same way. Just like the trick-or-treaters, contractors responsible for renovating historic buildings have begun covering them with scaffolding or tarps with an illustration of the building itself. Photographer Han Sung-pil took to the road to chronicle this phenomenon, which seems to have begun in Europe.

These pictures are placeholders, there to say this building was here before and will be again. Han’s work exhibits mixed feelings of amusement and bitterness at the trickery, questioning the border between landmarks and their representations, between illusion and reality, which these pictures blur.

Han’s collection is on display at “In Between Layers,” now running at Gallery Zandari near Hongik University in western Seoul. Perhaps the most interesting work there for local audiences is “Plastic Surgery,” which shows the protective screen covering Sungnyemun, the massive gate, also known as Namdaemun, that once anchored the south side of Seoul’s ancient city walls. The famous Joseon Dynasty (1392-1910) era gate in central Seoul was destroyed in a fire in early 2008 and is now under restoration.

“Well, the authorities call it restoration, but it is more like a reconstruction,” Han said at the opening of the exhibition Thursday. “So I call this photo ‘plastic surgery,’ with my bitter feelings in the title. The real one is gone and its illusion has now replaced it.” 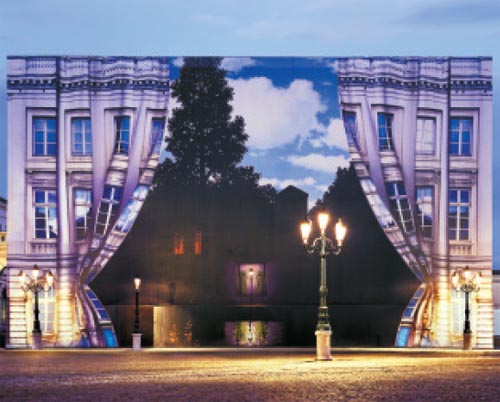 But not all of Han’s photos have bitter feelings attached to them. Some are pure fun. “Light of Magritte,” for example, depicts the covering of the Magritte Museum, which was under construction in Brussels, Belgium, when the photo was taken.

In the photo, the covering features a print of the famous painting “Empire of Light” by the Belgian surrealist artist to whom the museum is dedicated. In this case, the image includes not just a representation of the building underneath but also a gateway to an illusionary world.

Near the building sit real street lamps that look very similar to the one in the painting, lit below the blue sky of the “magic hour,” or the time right before sunrise or after sunset. This blurs the line between the space outside and the world inside Magritte’s painting, generating a second layer of illusion.

Sometimes, Han creates the first layer of illusion himself, instead of simply taking pictures of a preexisting illusionary print. This is true for “The Ivy Space.”

This photo shows the office building for the monthly architecture magazine “Space,” which boasts a 44-year history. The building, built by Kim Swoo-geun (1931-1986), a pioneer of Korean modern architecture and the founder of the magazine, is famous for its brick walls covered with ivy. But Han said he regretted that the walls covered up the beautiful spaces inside the building. So he took photos of the interior of the various rooms, and made a huge banner with these photos printed and arranged on it. He then acquired Space’s permission to hang it on the exterior wall of the building.

“People told me that they were startled to see the banner at first, shouting to themselves, ‘Where has the wall gone?’ It was so funny,” a representative from the magazine “Space” said at the exhibition opening. 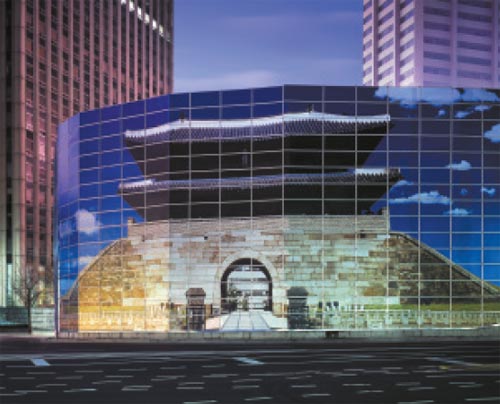 Regrettably, the image could not remain there for long due to its weight and other problems. But it lives on in Han’s photo, the second layer of illusion - and in the eco-friendly shopping bags that Han made out of it after it was taken down.

This penchant for endless transformation is why Park Pyeong-jong, a photography critic, calls Han “a magician.”

“Our eyes are susceptible to optical illusion,” Park wrote in a note in English for the exhibition. “Plato once degraded images as a substandard form of recognition by considering that art is deprived from essence. However, people get a sensual thrill through the ‘deprivation’ .?.?. Han’s photographs successfully embody a pleasant structure of ‘trickery’ and ‘illusion’ that visual art attracts.”

*The exhibition continues until May 9. For more information, visit www.zandari.com or call 323-4155