An opera tragedy that flits between East and West

An opera tragedy that flits between East and West 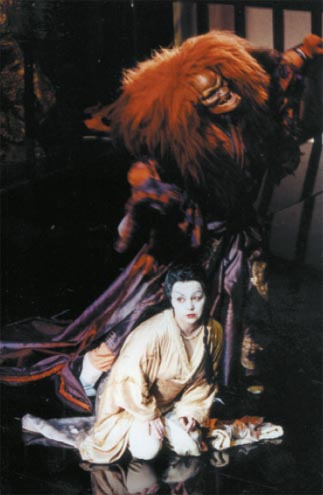 It may not be the most popular opera in the world, but from the number of times it’s performed every year, “Madama Butterfly” certainly deserves to be in the running.

Better known by its English title “Madame Butterfly,” the opera is set in the city of Nagasaki, Japan, around 1900. It tells the story of a young, vulnerable Japanese geisha named Cio-Cio San, who has been abandoned by the American officer Pinkerton and desperately longs for her lover’s return, only to meet a tragic end.

Written by the Italian composer Giacomo Puccini (1858-1924), Madame Butterfly has touched the heartstrings of audiences around the world for more than a century since its premiere in 1904 at La Scala in Milan, Italy, and Cio-Cio San still remains the most famous heroine in opera history.

Butterfly is coming to Seoul again, a year after the production by the Italian opera house Teatro Verdi-Trieste was staged here in March 2009. But what sets the new production apart is the national origins of its singers - local company Sugi Opera has brought together Koreans and Italians to alternate in the main roles.

Korean soprano Kim Young-mi and Italian soprano Paola Romano, both of whom have spent many years playing Cio-Cio San, will appear as the heroine in the upcoming show, opposite Korean tenor Shin Dong-won and Italian tenor Mario Malagnini, who also played Pinkerton at the Teatro Verdi-Trieste’s Seoul production of Butterfly last year.

When asked what motivated her to use a joint Korean-Italian cast, Park Sugi, the head of Sugi Opera and chief director of the production, said, “I wanted to show both the Western and Asian aspects that the opera itself has by combining Italian and Korean singers, plus an Italian director’s touch.”

That Italian is Antonio De Lucia, who was invited to Seoul specifically to work on the new production.

“Through the forthcoming Madame Butterfly in Seoul, I intend to tell a story which is universal and can relate to women from all walks of life around the world, rather than just that of one poor Japanese woman,” De Lucia said. “The other thing which I will focus on this time is to convey what Puccini would intend at the time when he wrote music for this opera. It is not easy to show my ability within certain limits, but I’m excited and pleased to do this.”

For Kim, the Korean soprano who will play Cio-Cio San, playing the role at this point in her life is particularly significant.

“A thousand emotions crowd on my mind at this moment, looking back on my past playing Cio-Cio San for all these years,” she said. “It’s true that [at 56] I’m quite old to play the character, a 15-year-old, but I will compensate for that possible incompatibility with my singing and acting skills, which I believe have progressed through playing the role for the past years.”

Kim has been called the “Maria Callas of Asia” by the tenor Luciano Pavarotti.

The upcoming performance is also special for Shin, the Korean who will play Pinkerton, because it will be only the fourth time he has appeared in Korea. He performs much more often overseas.

“Because opera is originally a genre foreign to Korea, almost all operas staged here seem to be imported from outside, including the production techniques and other things,” he said. “However, what I found extraordinary about the Korean opera is that here we have really fine teamwork. I’m also sure that there is a bright outlook for the Korean opera, given that we are putting on stage this great production of Madame Butterfly in Seoul.”

Asked what he thinks of Pinkerton, who is considered a historic “bad guy” character in opera, Shin said, “While this is the first time that I will play the role, I absolutely agree with that assessment - I think that he is the worst guy in the universe, though he later lives to regret what he has done.”

Placido Domingo, the world-famous tenor who played the role many times throughout his career, once said that he believes that Pinkerton suffers his own punishment after Butterfly’s suicide.

“Probably after that moment, he’s unhappy for the rest of his life,” he said.

*Madame Butterfly will run from tomorrow to Sunday in the Opera Theater at Seoul Arts Center, Seocho-dong, southern Seoul. Performances will begin at 7:30 p.m. tomorrow, Friday and Saturday and at 5 p.m. on Sunday. Ticket prices range from 30,000 won ($26.50) to 300,000 won. To reach the venue, head by subway to Nambu Bus Terminal Station, line No. 3, exit 5.