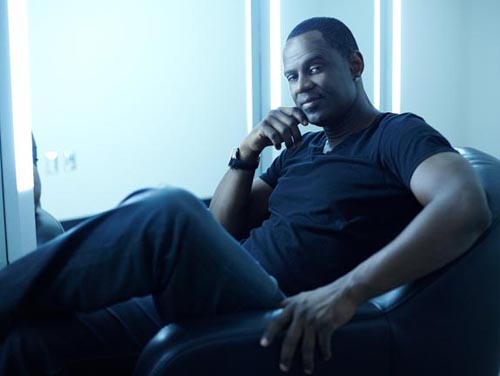 R&B star Brian McKnight will perform in Seoul on April 1 at Jamsil Indoor Gymnasium. See MUSIC, below. Provided by the organizers

Kim will begin the recital with Rameau’s “Invocation et Hymne au Soleil” and treat the audience to his operatic renditions of Handel’s “Presti Omai I’Egizia Terra” and many more.

Kim graduated from the department of vocal music at Chugye University for the Arts in Seoul before going to Germany to study music at Heidelberg University.

The songs played in the restaurant represented the youthful dreams of freedom and peace of that era.

The restaurant is long gone, but for tonight the Sejong Center will revive the music that used to fill its dining room.

The concert will feature the songs and artists from Mugyodong Ggotnip’s heyday, and take audience members on a nostalgic journey back in time.

This is a must-see for anyone who visited Mugyodong Ggotnip in the past or who is just curious about Korean folk songs during such a turbulent period of the country’s history.

Founded in 1996, the chamber orchestra consists of 19 stringed instrument musicians who perform without a conductor. All its members, who have won prizes in prestigious domestic and foreign competitions, are outstanding musicians who are active both on stage and academia.

Delfs, a German, is the conductor laureate of the Milwaukee Symphony Orchestra and principal conductor of the Honolulu Symphony. He earned his master’s at The Juilliard School of Music in 1984.

Described by the U.K. newspaper The Times as “God’s gift to the flute,” music lovers should not miss this opportunity to see Bezaly. Classics Today has hailed her as “a flutist virtually without peer in the world today.”

The orchestra will perform the “Colas Breugnon Overture” by Kabalevsky, followed by “Flute Concerto” by Khachaturian and finish with Symphony No. 2 in D major, Op. 43 by Sibelius.

Tomorrow: “Kim Hee-sung’s Pipe Organ Recital.” Organist Kim Hee-sung, who has performed at Sejong Center every year since she returned to Korean in 1995, will hold a special concert with Korea’s top saxophonist Lee Jeong-sik tomorrow.

The first part will feature preludes and fugues by maestros such as Bach and Dupre.

In the second half of the recital, the energy of Utterback’s jazz music will meet the elegant sound of the organ, which is the emblem of traditional Christian church music.

This unique blend of classical and jazz music is a great introduction to the versatility of the pipe organ.

March 31: “Bob Dylan.” World-famous singer-songwriter Bob Dylan will perform in Seoul for the first time at the end of March. Dylan has been a prominent figure in folk and rock music for the last five decades.

He has released 35 studio albums and 58 singles over his career.

Dylan’s Seoul concert is part of his spring tour of Asia. He released three albums last year, and is expected to play songs from these albums as well as popular hits from his early career.

The award-winning artist has nine studio albums and dozens of hits including “One Last Cry,” “Back at One” and “Shoulda Woulda Coulda.”

This 40-year-old American singer has sold over 20 million records around the world. He is best known for his smooth voice and his wide-ranging musical talents. He can play nine instruments, including the piano, guitar, drums and tuba.

Artists Glen Hansard and Marketa Irglova will perform hits from the film sound track such as “Falling Slowly” and “If You Want Me,” and also songs off their new album including “Low Rising” and “I Have Loved You Wrong.”

Friday to March 31: “Swan Lake Ballet.” The Universal Ballet presents the ballet classic “Swan Lake” later this month. The ballet’s mythical story, elaborate choreography and Tchaikovsky’s heart-wrenching music have made this one of the world’s most popular ballet pieces.

Friday to April 4: “The Beat.” This nonverbal performance presented by the Seoul Performing Arts Company will debut this week. In the vein of “Nanta” or Blue Man Group, The Beat’s cast takes everyday objects and transforms them into rhythmic instruments.

The Beat’s set is part installation art, part junkyard, and is meant to inspire both recycling and toe-tapping fun.

Sunday: “The Flower Garden of the Wind.” The Lee Ballet Company is holding a ballet performance based on a novel of the same name which details the lives of the late Joseon Dynasty (1392-1910) painters Kim Hong-do and Shin Yun-bok. While ballet is often considered a Western form of dance, the Lee Ballet Company has found a way of creating a uniquely Korean ballet with this performance.

Saturday to April 5: The world’s largest concentration of blossoming cherry trees plays host to this popular annual festival. In addition to the flowers, the festivities celebrate the port city’s proud naval tradition, including national hero, Admiral Yi Sun-shin. The Jinhae Naval Port Festival, also known as Gunhang Festival, has been held annually since 1963. It is one of the most famous cherry blossom events. The Jinhae area is an outstanding sightseeing destination in the springtime, when it is flooded with tourists who come to witness the spectacular blossom-filled streets.

To get to Jinhae from Seoul, take a bus from the Express Bus Terminal, lines No. 3 and 7.

April 30 to May 2: Ulsan has produced iron for 2,000 years stretching back through the Samhan Dynasty and then the Joseon Dynasty (1392-1910). In the 1960s it began its rise as the major iron industrial center of Korea. The region’s traditional iron culture is the theme of this festival. Activities include a traditional folk game called soeburi (a game played by making iron), pungmul (folk music) performances and learning programs. The festival program is packed full of unique events for visitors to enjoy.

From Seoul Station, take a train headed toward Ulsan and get off at Ulsan Station. Then take bus No. 702 or a taxi to the festival grounds.