Another inning for broadcasting battle

Another inning for broadcasting battle

Round two has begun in the battle over sharing broadcasting rights to major sporting events.

It may come down to a split decision.

Until this year, the country’s major broadcasting companies had always aired prime international sports events like the Olympics. SBS, MBC and KBS had formed a consortium known as the “Korea Pool” and placed one consolidated bid for broadcasting rights to sporting events in order to keep down the cost and prevent unnecessary competition. 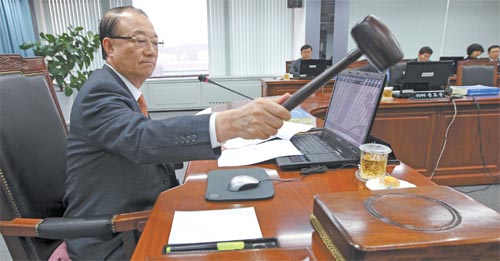 Korea Communications Commission Chairman Choi See-joong is trying to mediate among SBS, MBC and KBS in their dispute over who should air major sporting events. [Yonhap]

But this year, when last-ditch efforts to arrange joint broadcasting of the Olympics broke down over disagreements about how much KBS and MBC should pay SBS, the company paid for - and broadcast - the Games solo.

SBS claimed that Korean broadcasters had always focused on only a handful of events that were popular because Korean athletes had a good chance of winning a medal, and by broadcasting the Games alone, it actually increased the viewers’ choices.

SBS said that without the pressure to compete, it could introduce a wider variety of Olympic events. And indeed, during the 17 days of the Olympics, SBS allocated a total of 200 hours of coverage - about 50 hours more than the usual combined Olympic coverage aired by all three broadcasters.

Score one for SBS.

Industry observers say that although the company shouldered a large financial burden, its calculated risk paid off.

SBS is ready to take the same gamble now with the upcoming World Cup in South Africa, which it intends to broadcast on its own unless the other broadcasters pay the company enough to compensate for its troubles.

“Profit-wise there’s a limit if SBS decides to go it alone again with the World Cup, but it’s a good opportunity for SBS to create more brand awareness in a time when the new media market is growing and companies are scrambling for viewers,” analyst Min Yeon-sang of Hi Investment & Securities told Yonhap. “Short term-wise, sharing the cost is better, but in the long term SBS might opt to go alone again.”

Left out of the potentially lucrative advertising revenue that is tied to the largest sporting events, KBS and MBC have launched an all-out war, airing special programs and using their own news outlets to preach to viewers that they have been wronged, claiming SBS reneged on a deal.

Both companies also submitted a grievance mediation request to the Korea Communications Commission, arguing that SBS had violated the viewers’ universal access rights and that the committee should step in.

Park Young-mun, the sports department head at KBS, argued that the communications commission needed to be much more aggressive in resolving the conflict, so that public broadcasters whose purpose is to satisfy the viewers are not left behind.

In a press statement released earlier this month, SBS said it was willing to negotiate a joint broadcast of the World Cup. Experts say the company is well aware that the cost to air the World Cup is much higher compared to the Vancouver Olympics, and thus there’s a greater risk. For the 2010 World Cup alone, SBS paid $65 million - four times more than what it had to pay for the Vancouver Olympics.

And with commercial slots both limited and affected by a time difference that drives down their value, and profit projections uncertain even if advertising rates are substantially raised, some analysts believe that SBS is likely to be willing to share the broadcast rights.

Speaking on condition of anonymity, an SBS official said while SBS originally planned to jointly broadcast the Olympics with MBC and the World Cup with KBS, now it’s a question of how much the other companies are willing to pay to share in the broadcasting rights.

“We paid the International Football Association [FIFA] a lot of money, because the mandatory package to get the World Cup included a lot of other sporting events. That needs to be addressed,” said the official.

For instance, in 2007 SBS had to broadcast the under 17 Youth World Cup as part of the 2006 deal that cost the company $1.7 million. FIFA makes a precondition of the other events in order to attract more fans to the sport.

SBS is treading lightly in light of the economic crisis, realizing that unforeseen global financial events could put the company so deeply in the red it could be unable to recover.

Both MBC and KBS have said they are willing to negotiate in good faith, but industry experts say it will come down to money - a matter on which the companies couldn’t agree when they tried to hammer out a deal over the Vancouver Olympics.

Nevertheless, there isn’t much time left to negotiate. Observers say that given the time in which World Cup sponsorship deals would have to be made, the Korean broadcasters would need to strike a deal by Friday.