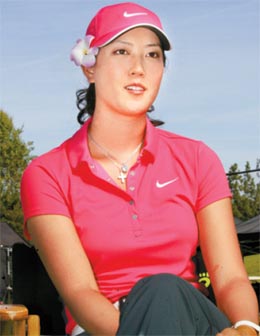 LOS ANGELES - In the morning hours of March 15 at South Hills Country Club in West Covina, Calif., a familiar face dressed in matching pink hat and T-shirt showed off her smooth swing for the cameras.

Korean-American golfer Michelle Wie, 20, has been busy on and off the green of late. Her play has improved since she overcame a wrist injury, and she has signed endorsement deals with Kia Motors America last month and more recently with McDonald’s USA. The fast-food chain made an official announcement yesterday and plans to target young people, especially Asian-Americans. The terms of the deal were not disclosed.

Television commercials of the young golfer were initially to be limited to the American market but due to her rising popularity, versions in Korean, Cantonese, Mandarin and Tagalog will be also produced.

“I’m thrilled to be partnering with a global company like McDonald’s, but I am especially proud of the message we’re working to deliver together,” said Wie. “Growing up, I was taught to believe in myself, to dream big, and that success is a team effort. I lived it, and with the help of caring community partners like McDonald’s, other kids can achieve their dreams too.”

At the shooting, Wie looked like any college student her age rather than a well-recognized face who became the youngest player to qualify for an LPGA event at the 2002 Takefuji Classic and the youngest to make the cut at the 2003 Kraft Nabisco Championships.

Wie spoke about Olympic gold medalist and world champion Kim Yu-na: “Kim’s recent achievement is a big motivation,” Wie said. “I watched her performance at the Olympics and it was amazing. It’s flattering to be compared with her.”

“Michelle Wie is one of the world’s most inspiring young athletes. She continues to excel, not just in golf, but also in academics and a number of other endeavors,” said Neil Golden, senior vice president and chief marketing officer for McDonald’s USA. “She is an excellent role model for youth.”

Wie is set to compete next in the inaugural Kia Classic, which happens to be sponsored by Kia Motors America and presented by J Golf. It will be held in Carlsbad, Calif., between tomorrow and Sunday.

“I will have to do better than at other events,” Wie said. “I’m looking forward to it.”