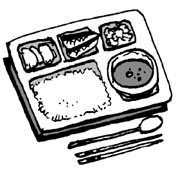 In the 19th century, officers of the British Army were a good head taller than their soldiers. The height difference was not genetic; the officers happened to come from wealthy families that could afford to feed their children properly from infancy. It is said that when these privileged youths entered the Royal Academy at age 14, they were a foot taller than their working-class peers. The English expression “to look down on” is known to have come from this reality.

But perhaps this discrepancy is not surprising to those familiar with the living conditions in North Korea. What is shocking is that a similar height and health difference exists right here in South Korea, among children born and raised in this country.

Moreover, children from poor families had much higher chances of being overweight and suffering from anemia because they often fill their stomachs with high-calorie junk food, like ramen and snacks.

There has been debate recently in the National Assembly about instituting a wide-reaching free lunch program in schools. For children from poor families, it is highly likely that the free lunch for schoolchildren is the sole balanced meal they receive a day. Therefore, improving the quality of school meals would be a policy helpful to the poor.

Rich families can afford to feed their children as much fresh fruit and vegetables as they need, but it is difficult for the poor to feed their children even the recommended daily allowance of 400 grams. European Union countries provide free school lunches to about 30 percent of students. If they have extra money in their budgets, they choose to increase the amount of fruit and vegetables in the lunches rather than the number of children who get to eat for free.

National Assembly members are currently arguing over how many more students should be able to receive free school lunches. But if there is a larger budget for school lunches available, we should spend the extra money on healthier lunches or on feeding poor children during school vacations instead.