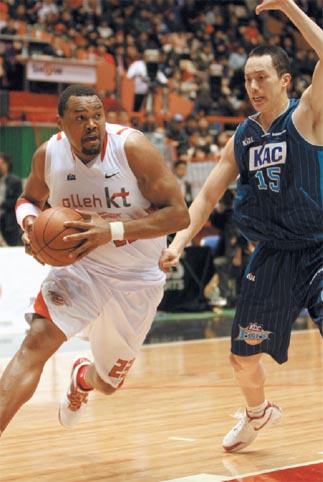 Jasper Johnson, left, of KT Sonic Boom drives past Kang Eun-sik of KCC Egis in game two of the KBL semifinals on Tuesday in Busan. [YONHAP]

The KT Sonic Boom overpowered their opponents with strong defensive play and a dominating performance from its frontcourt during a 92-65 win in game two of the best-of-five Korean Basketball League semifinals in Busan on Tuesday.

With center Ha Seung-jin still missing from the KCC Egis lineup, Jasper Johnson and other KT forwards dominated the paint.

Johnson ended the night as the game’s highest scorer, with 21 points and nine rebounds. Park Sang-oh and Kim Young-hwan contributed with 14 points each.

KT’s head coach, Chun Chang-jin, decided to give his sixth man significant playing time, and Park responded with 14 points, five rebounds and two assists in 21 minutes and 27 seconds of play, with 12 of his points coming in the first quarter. It was a big improvement over the six-point effort in game one.

Kim provided three-point shooting and post-up play to vastly improve from his seven-point effort in game one. “Kim and Park played great for us tonight,” said Chun, giving a thumbs-up.

“Kim and Park are solid offensive players but in all honesty, their defense needs improvement. We went with a rotating defense to make up for that shortcoming,” he said.

Chun’s defensive scheme seems to have worked to near-perfection. KCC’s top two forwards, Ivan Johnson and Terrence Leather, were held to a combined total of 21 points and seven rebounds.

Leather, who led the league in scoring last season, was a nonfactor as he got into foul trouble early on in the game and finished with nine points and one rebound in nine minutes and 35 seconds.

The KCC backcourt also failed to show up for the game. Point guard Jeon Tae-pung, who has been a dominant force in the postseason so far, was checked to six points and four assists in the game.

“The defensive strategy we drew up for the game worked for us today,” said Chun.

“We do not play rough defensive. We rely on a quick rotating defense to stop our opponent. We cruised to a win after our defense stopped Jeon.”

KT does not boast a strong backcourt. While the entire backcourt did not produce much on offense, veteran point guard and team captain Shin Ki-sung outplayed his counterpart by scoring eight points and adding six assists.

“I studied the Jeon’s tendencies by looking at his films, and I pressured him hard throughout the game,” said Shin.

“KCC will come out ready to play in game three. We must stay confident and maintain our composure, and use a quick transitional game to our advantage.”

With the series tied at one game apiece and the two teams set to face off in the crucial game three tonighit in Jeonju, North Jeolla, KCC’s center Ha is expected to dress and bolster the Egis frontcourt.

In order for KT to be effective in game three, it will need another strong defensive effort and scoring from the trio of Johnson, Park and Kim.