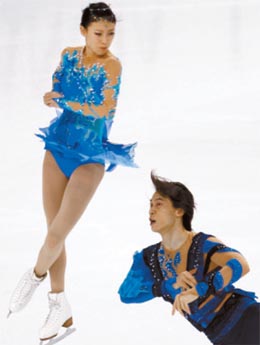 China’s Pang Qing is thrown by her partner Tong Jian as they perform their short program in the pairs competition at the World Figure Skating Championships. [AP/YONHAP]

TURIN, Italy - Olympic silver medalists Pang Qing and Tong Jian skated a flawless and elegant short program to take the lead in the pairs competition at the World Figure Skating Championships on Tuesday.

Pang and Tong earned a season-best 75.28 points for their short program, to the same “The Pearlfishers” they skated to at the Vancouver Olympics. The 2006 world champions are two points ahead of Russia’s Yuko Kavaguti and Alexander Smirnov.

Two-time defending world champions Aliona Savchenko and Robin Szolkowy eked into the top three even though he doubled their side-by-side triple toe loops. But the Germans will have to fight to keep their spot on the podium in today’s free skate. Savchenko and Szolkowy, bronze medalists in Vancouver, scored 69.52 points, putting them a mere .04 points ahead of Russia’s Maria Mukhortova and Maxim Trankov. They are .32 points ahead of China’s Zhang Dan and Zhang Hao.

Pang and Tong soared on side-by-side triple toes and a throw triple loop, and their score was nearly four points higher than in Vancouver. “At the Olympics, we were very stressed. Today we were relaxed. I think that might be the reason,” Tong said.

Tuesday, Olympic champions Tessa Virtue and Scott Moir won what might be the last ice dance compulsories at the championships. The Canadians scored 44.13 points, ahead of Vancouver silver medalists Meryl Davis and Charlie White with 43.25. Federica Faiella and Massimo Scali of Italy were third with 40.85. The original dance is today.

Virtue-Moir and Davis-White are the vanguard of ice dance, skaters who are trying to reshape the discipline into something more dynamic - and athletic. To them, compulsories have outlived their usefulness.

“I don’t think it is necessary anymore in today’s sport of ice dance. I think it has come a long way and [compulsory dance] is holding it back,” Moir said. “That’s our opinion.

“But what do I know? I’m only an Olympic champion,” he added with a laugh.

Compulsory dance is a TV ratings killer and hardly a stadium draw. It’s a full afternoon of dance teams performing the same steps to the same music one after another.

The International Skating Union will vote at its congress in June on proposals that would eliminate the compulsory dance. That would leave two segments of competition, the original dance and free dance.

Virtue said they spend up to two hours a day on compulsories, which both she and Moir believe is time that could be better spent.

“I can’t imagine what we could do with our OD and free program if we had that extra time,” Virtue said.

“We believe it is not really taking dance in the direction most people are trying to take it right now,” Davis said. “We have always been trying to put athletics in the sport.”

But compulsory dance also develops the basic skill set that helps distinguish the discipline - deep edges, speed, stroking, skating in unison - and some skaters are reluctant to see it go. Even if the ISU eliminates them at the senior level, some said compulsories should continue to be required for junior ice dancers.

“You can’t call it ice dance” if there are no compulsories, American Evan Bates said.