Books as far as the eye can see

Books as far as the eye can see 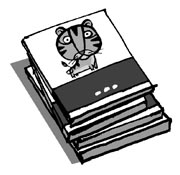 “Orbis Pictus,” or “The Visible World in Pictures,” written by Czech educator Johann Amos Comenius in 1658, is said to be the world’s first illustrated book. It deserves the title, with its explanations of concepts such as flowers, sky, fishing and marriage through 150 pictures.

The author is known to have taken note of the fact that pictures brought fun and understanding to children. Therefore, the book was a visual textbook for preschool-aged children to learn language.

I wonder whether Korea has a longer history than Europe as far as the publication of educational picture books is concerned. The answer becomes clear if we consider the “Iphakdoseol,” or “Entering the World of Learning in Pictures,” written by Kwon Keun during the reign of King Gongmin of the Goryeo Dynasty.

The book, written in 1390, is designated Korea’s National Treasure No. 1,136 and was a beginner’s book for neo-Confucian scholars. The book contained about 40 illustrations including a picture uniting heaven, people and the human mind. In the preface, the author wrote, “As beginners, who learned such Confucian teachings as Daehak and Jungyong, did not understand their meaning even if I gave them detailed explanations, I drew pictures for them and interpreted the meaning of the pictures.”

Simply put, it’s a book that made it easy to understand the meaning of its contents. If we compare this book with Europe’s first illustrated book, this one is over 300 years older.

The era of modern picture books, which our schoolchildren read these days, started in England after 1850. Book illustrators like Randolph Caldecott, Kate Greenaway and Walter Crane opened the “golden era of illustrated books” by publishing colorful children’s stories.

In Korea, however, local illustrators only started to actively publish picture books about 10 years ago. Korean children have, in the meantime, read translated versions of imported books.

But the situation is changing. Korean picture books have started to attract attention on the world book market, and the country has exported the copyrights of books to scores of countries. Among the hundreds are “Zoo,” published by Biryongso; “Banjjagi,” published by Yeowon Media; and “Patjuk Grandma and Tiger,” published by Woongjin Think Big.

The 2010 Bologna Children’s Book Fair, the largest event of its kind in the world, opened for four days on Tuesday. Some 50 Korean publishers are exhibiting books there. Among them is “Temple Built of Stone, Seokguram,” written by Kim Mi-hye and illustrated by Choe Mi-ran, one of the leading contenders for the prestigious BolognaRagazzi Award in fiction. Six writers including Shin Hyuna have also been selected as illustrators for this year’s exhibition.

It seems Korean illustrators are now capturing the minds of children around the world.