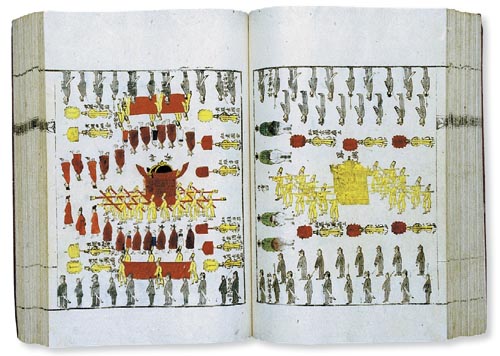 A photograph of the “Uigwe” volume that depicts the state funeral of Empress Myeongseong. The ancient Korean royal texts were found at the Imperial Household Agency in Tokyo. By Kim Hyun-ki


TOKYO - Ancient Korean royal texts thought to be in Japanese possession have been located and now photographed for the first time.

Over the past two months, the JoongAng Ilbo worked to gain access to texts of the Joseon Dynasty (1392-1910) at the Imperial Household Agency in Tokyo. They included volumes of “Uigwe,” “Jaesil” and “Gyeongyeon.”

Uigwe is a collection of royal protocols. Jaesil contains information on medicine, customs of the day and military history. Gyeongyeon was used to teach kings about liberal arts.

These texts had been presumed to be in Japanese possession after they were apparently stolen during the Japanese colonial rule in the early 20th century.

One volume under Gyeongyeon, named “Tongjeon,” had an official seal at its end, clearly showing the letters “Goryeo.” It is the name of the dynasty that preceded the Joseon era. The Tongjeon held at the agency is said to be the sole copy of the document existing today.

One volume of the Uigwe discovered in the search, titled the “Illustrated Uigwe of the State Funeral,” contains two fragments of drawings depicting the state funeral procession of Empress Myeongseong in 1897. In the past, only the cover and a single fragment of a drawing from this particular volume had been made public.

Thirty-eight volumes of Jaesil were also discovered. Each of these books was stamped with a large red seal that showed the texts had been shipped to Japan during the colonial period (1910-1945) through the Japanese General Government in Seoul.

Most of the books found during the research are among the cultural relics that Korea has pressed Japan to return.

The Korean government has specifically targeted the Imperial Household Agency, a government body that handles issues related to the imperial family and stores the Privy Seal, the official seal of the emperor, and the State Seal.

Korea estimates that 4,678 Korean books are held at the agency.

On Feb. 26, the National Assembly unanimously passed a motion demanding that Japan return all the Uigwe in Japanese possession. Japan has been reluctant and has claimed that under the 1965 Treaty on Basic Relations, Korea renounced claims to these and other cultural properties.

Korean government officials, lawmakers and activists alike said the additional discovery was significant. But while legislators from across the political spectrum felt the discovery has given Korea more impetus to push Japan, bureaucrats expressed a more guarded optimism.

Grand National Representative Lee Jung-hyun, who drafted a motion for the return of the Uigwe last month, said Japan should express “significant regret” over its past and should immediately return the relics stored in the Imperial Household Agency “for the sake of future-oriented relations between Korea and Japan.”

“The National Assembly urges the Korean government to take note of the historical and cultural value of the Joseon Dynasty Uigwe in the Imperial Household Agency, and to engage in active negotiations with Japan for their return,” Lee said in a statement.

The main opposition Democratic Party echoed that sentiment. Its spokesman, Woo Sang-ho, said since most of the relics were stolen during the colonial period, Korea should push Japan harder to return them this year, the centennial of the annexation.

Another DP lawmaker, Kim Boo-kyum, said Japan had simply ignored the Korean relics even though they had been stored at its imperial museum and said Japan should take this opportunity “to look itself in the mirror and take time to reflect on what it did during the colonial era.”

“I hope to see an era when common sense takes over and all looted cultural relics are returned,” Kim said.

One senior Blue House figure said Korea-Japan relations should take on a forward-looking approach and in order for that to happen, “the Japanese government should show a willingness to change its position on returning cultural relics” to Korea.

A Foreign Ministry official in Seoul said he found it “unusual” that the Imperial Household Agency granted a Korean journalist access to these volumes. “[The agency] must have been aware of the impact the articles would have,” the official said. “Perhaps Japan is more open to [Korea’s request for return of relics].”

Another ministry official said the latest findings should lead to more efforts to unearth hidden relics in Japan.

But others weren’t so sure.

Park Sang-gook, head of the Korea Cultural Heritage Institute, acknowledged the importance of bringing back the Joseon royal texts but said he was against an “excessively emotional” approach to the issue.

“We have to remember that we have a negotiation partner in the Imperial Household Agency,” Park said. “Rather than getting all emotional, we have to have respect for the other side, too.”

One Foreign Ministry official said Korea will take a long-term view on the issue of retrieving relics from Japan but that the government hasn’t set a specific policy outline.

A diplomatic source said the government won’t likely try to speed up negotiations with Japan.

“The new discovery only represents the tip of the iceberg,” he said. “And if we make hasty requests for the return of these relics, then Japan will likely try to hide the ones they already have [but we haven’t discovered].”

It may be difficult to make additional discoveries in the near future. As some Korean historians had advised, getting past the administration at the Imperial Household Agency proved to be a tough challenge.

The agency asked for the exact title of the document, its classified number, and written permission from the related department at the agency. The archives and mausolea department had stored these volumes.

It took a full week to gather the necessary information, but that was only the beginning.

The books were so damaged that department employees supervising the reading session urged extra caution when turning over pages. No cell phones or cameras were allowed inside the library. No pen, pencil or eraser could enter, either. Shoes had to be left outside, and viewers’ hands were washed twice with antiseptic.

After four hours of the reading session, an employee noted that photocopying was not permitted. However, the employee said a photographer commissioned by the imperial agency could take pictures, and that a dozen pictures would cost 12,600 yen, or $140. Three weeks passed before the photos arrived.

The final step was to gain the agency’s authorization to publish these photos in the newspaper. That required another 10 days.