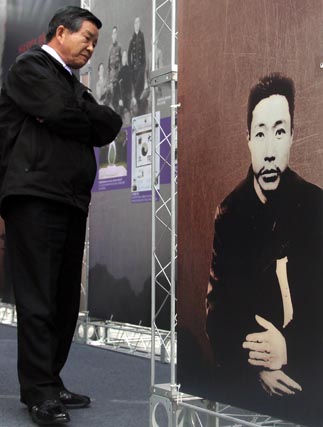 A special exhibition honoring Ahn Jung-geun begins yesterday on Cheonggye Plaza in Seoul to mark the centennial of his death. The exhibition will last until Tuesday. [YONHAP]

The Ministry of Patriots and Veterans Affairs in Seoul said yesterday that it is planning to organize a temporary joint working-level team of government officials and civilian experts - the first of its kind - to push ahead with discovering the remains of a martyred patriot.

The team will try to get access to records from China, Japan and Russia that may provide hints to the whereabouts of Ahn Jung-geun’s remains, said the ministry.

The announcement comes as tomorrow marks the 100th anniversary of the death of Ahn (1879-1910), one of the first Korean independence fighters against Japanese colonial rule over Korea from 1910-1945.

So far, the ministry has been managing the mission to search for Ahn’s body by itself, with diplomatic assistance from the South Korean Foreign Ministry.

“In accordance with Ahn’s last words asking that his remains be moved to Korean soil once the country won independence from Japan and in order to fulfill the Korean people’s desire to find his remains, we have decided to form the team,” said Woo Moo-seok, the vice minister at the Ministry of Patriots and Veterans Affairs. “The ministry will take the lead in organizing the team, composed of some 10 members. They include officials from the Independence Hall of Korea, the foreign and unification ministries as well as historians.”

Woo said the team should be finalized by the end of this month and will begin its mission full-force in April.

The leader of the team is likely to be selected from the Patriots and Veterans Affairs Ministry, he said.

“We are planning to meet officials from the Foreign Ministry [in Seoul] next week to discuss how to work with China and Japan diplomatically,” the vice minister said. “Our priority is to discover new records about the imprisonment of the national independence fighter. This time, we will also take advantage of lawmakers who network with Japanese politicians so that this issue can be discussed in high-level talks between two countries.”

An advisory group will also be organized to support the working-level team, added Woo.

In June 2006, an inter-Korean joint team had been dispatched to Luishun prison in the port city of Dalian, northeast China, where Ahn was executed on March 26, 1910, to scout locations where Ahn’s remains might lie. That group concluded that his body could be buried northwest of the prison. A South Korean excavation team dug for 29 days in March 2008 with help from the Chinese government, but failed to find any remains.

Ahn assassinated the first resident-general of Korea, Hirobumi Ito, on the morning of Oct. 26, 1909, at Harbin Station in the city of the same name in northeastern China. The assassination is widely believed by Koreans to have been a patriotic act.

Ahn is celebrated by Korean people not only for resistance to colonization but also for his efforts to bring about peace in the Asian region, particularly between Korea, Japan and China.