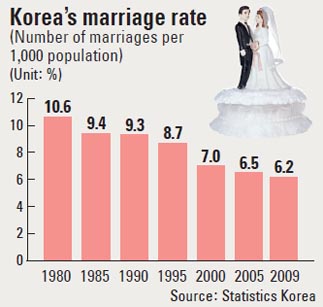 For Sunny Shin, a 32-year-old former ad agency manager, traveling is the biggest pleasure of her life that can’t be traded even for marriage - and so much “painful” baggage she says marriage brings.

“Dealing with in-laws and parenting and household chores are still considered women’s work,” said Shin, who just returned from a three-month-long trip to Spain and Britain and was recently offered a new job. “These don’t seem to be worth sacrificing my current lifestyle for at all.”

Thanks to a generous vacation policy at her previous employer, she has spent nearly a month each year vacationing in countries like Cuba and France.

“How many Korean men and in-laws out there will be liberal enough to deal with me? Very few, is my guess,” she said. “Plus, everyone knows the institution of marriage in this country can be a real battle for women, especially those with a career.”

A growing number of Korean educated women, who have a career and fully know the typical difficulties faced by working married women in this country, are shunning tying the knot as long as they can, if they decide to tie the knot at all.

And that definitely showed in yesterday’s data from Statistics Korea.

The nation’s marriage rate - the number of marriages for every 1,000 people in Korea - has plunged to a record low of 6.2 for 2009, the lowest figure since the government started tracking the statistic in 1970.

Such a “marriage strike,” as it has been dubbed by many local media worrying about fewer wedding bells heard across the country, has become a source of big concern among local policy makers grappling with the ever-dropping birthrate.

Korea’s annual fertility rate, or the number of children an average woman has in her lifetime, stood at 1.15 as of last year, the lowest among member countries of the Organization for Economic Cooperation and Development.

Women are also waiting later to get married and have children. The average age of women giving birth in Korea has constantly climbed, from 27.8 in 1994 to 29 in 2009 and to 31 as of last year.

The number of international marriages - mostly between men in rural areas and women brought from developing countries like Vietnam and China - amounted to 33,300, or about 10.8 percent of the 309,759 marriages that took place across Korea last year.

Among them, marriage between Korean men and foreign women amounted to 25,142, including 11,364 with Chinese women and 7,249 withVietnamese women. Indeed, 35.2 percent of the 5,640 Korean men in farming and fisheries professions who married last year did so with foreign women.

But the number of such marriages between Korean men and foreign brides has declined after hitting a record high of 30,719. The decline is thought to be due to Seoul’s making it easier for ethnic Koreans in foreign countries to come to Korea to find employment.

“Before then, some foreign women, including those from ethnic Korean communities in China, used marriage as a ruse to come to Korea to find work and send money to their families back home,” said one official at Statistics Korea who asked for customary anonymity.

“But we believe that after the rule took effect in 2005 some fake marriages have disappeared.”

The recent data also revealed an interesting development concerning marriages between Korean women and foreign men. They slightly rose from 8,041 in 2008 to 8,158 last year.

The surge mostly came from the marriages between Korean women and Chinese men, as the number of such marriages rose from 2,101 in 2008 to 2,617 last year.

Officials said they suspect some of the Chinese brides who came to Korea during the height of international marriages five years ago may have divorced their Korean husbands and married Chinese men.

“We have data showing that about 500 Korean women who married Chinese men last year are actually former Chinese citizens who were naturalized by marriage to Korean citizens,” said the official.