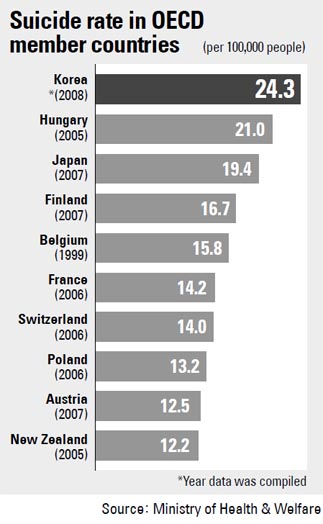 Korea has the highest suicide rate among all the 30 Organization for Economic Cooperation and Development member countries, according to a report by the Ministry of Health and Welfare yesterday.

The ministry report was based on the latest data from Statistics Korea, which compared suicide rates in Korea in 2008 to other countries.

Korea’s suicide rate has risen drastically in the last 10 years, the study found. In 2008, 12,858 Koreans committed suicide - up 49 percent from the 1998 figure which was 8,622. The data showed suicide as the fourth most common cause of death in Korea in 2008, accounting for 5.2 percent of all deaths. This follows the No.1 cause of death, cancer, with 28 percent, as well as brain and heart illnesses.

Suicide was the leading cause of death for people in their 20s and 30s, accounting for 40.7 percent and 28.7 percent of deaths in the respective age brackets.

Seo Chong-hee, a managing director at the Center for Suicide Prevention in Suwan, Gyeonggi, said the elderly may be swelling the rising number of suicides.

The health ministry, together with the Korean Council of Religious Leaders, said yesterday they will wage a public campaign against suicide. In a joint statement, they said “The idea that suicide can never be a solution to a problem or a form of escape from pain, must be spread throughout society.”

The ministry said that it plans to implement educational programs so that one can spot signs of depression and/or suicidal tendencies.