Baseball fans regularly packed stadiums across the country for a single-season attendance record last year. The KBO is hoping to improve on the numbers this year. By Kim Min-gyu

For baseball fans, the wait is finally over. It’s the start of a new season, a fresh chapter in which new heroes will emerge and the familiar cast will make further attempts to entrench their names among the ranks of the greats.

Heading into 2010 play, the league’s front office is attempting to set another single-season attendance record and is hoping shorter games will score big with the fans. This year’s season opener will take place tomorrow afternoon, a week earlier than last year.

In targeting a new single-season attendance record of 6.5 million fans, the Korea Baseball Organization’s front office is expecting big but attainable things. Since its inaugural season in 1982, the league has attracted a total of 89.9 million fans. Closing in on the 100 million mark, KBO officials announced they are looking for a record number of fans in the upcoming season. Considering a single-season attendance record was set last year at 5.9 million, the goal is not a stretch.

The biggest issue coming into the season is the rule changes that will affect both the pitchers and the batters: the 12-second pitch count and widened strike zone. In keeping with the latest trend, KBO has finally decided to take measures to cut down on length of games.

Pitchers will be required to start their windup within 12 seconds of the batter stepping into the box.

The second-base umpire will have a stopwatch on hand and give a warning to a pitcher who does not throw within the time limit. A second warning will earn the pitcher a ball count.

Hitters, on the other hand, will have to adjust to a wider strike zone. The new zone is about a half a baseball wider on both sides of the plate. 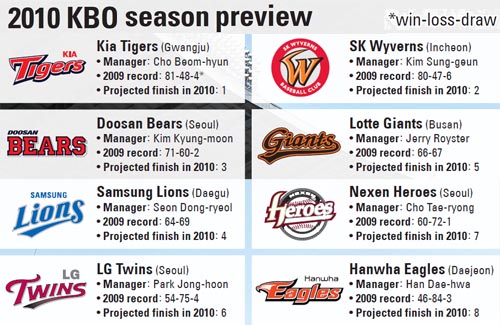 The good and the bad

In what should shape up to be one of the most competitive seasons in recent memory, defending champs Kia Tigers have the depth to challenge for their second consecutive title. Kia won the Korean Series title for the first time in 12 years last season but are loaded with talent.

The SK Wyverns, Doosan Bears and Samsung Lions will likely battle for the remaining three postseason spots while the Lotte Giants, who finished their second consecutive preseason with the best overall record, and LG Twins should not be dismissed.

Preseason projections from the eight managers have six teams in a tight battle for the four playoff spots while the Nexen Heroes and Hanwha Eagles are already being counted out.

“Unlike previous seasons, it’s hard even to predict the first round of playoffs. The early goings of the season will be important. I think everyone has a shot this year,” said SK manager Kim Sung-geun.

Doosan’s Kim Kyung-moon predicted Nexen and Hanhwa would struggle but the other six squads would compete in a tight battle.

The two teams that are in rebuilding mode are the cash-strapped Heroes, who traded a bevy of talent during the offseason, and Hanwha, who finished dead last in the league standings last season.