Nam made a splash in the global art scene when she depicted the work spaces of famous artists like Paul Cezanne and Vincent van Gogh, bringing her own imaginative perspective to the secret and personal spaces of master artists.

From the beginning of her career, Nam has focused on indoor scenes, transforming mundane settings such as living rooms and ceilings into detailed studies.
Now, she has broadened her focus to include the work space and objects which represent what Nam imagines was essential to the lives of great artists.

This exhibition not only shows the studios of these artists, but gives viewers a peek into Nam’s inner emotions and how she understands the artistic process. Rather than showing famous works like Van Gogh’s “The Potato Eaters” directly, she presents symbolic messages in his paintings. Nam’s use of surreal surroundings and bold colors brings the innermost desires of each artist to life.

Through April 18: “Park Nosoo - A Boy Waiting for the Spring.” This large retrospective exhibition aims to take a comprehensive look at the lifetime achievement of Park (born in 1927), an artist who transformed traditional Korean painting through the use of vivid and transparent colors, bold composition and the aesthetic exploration of empty space.

Park won the Presidential Prize at the 1955 National Art Exhibition of Korea with a Korean color ink painting, and became the first of the postwar generation of artists to win such prize. 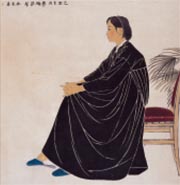 The show’s title, “A Boy Waiting for the Spring” refers to a “boy” who appears as a symbolic figure who denies the existing order and sticks to the noble ideal - an empathetic subject for the artist.

Similarly, spring represents hope for the future and symbolizes the clear, pure world of the spirit depicted in the works by Park.

The dramatic contrast between white and blue and ample empty space in the paintings are conducive to contemplation. Viewers can feel the vibrance and freshness of spring when looking at Park’s works.

This exhibition offers rare access to some 100 of Park’s most representative works, including landscapes, early pieces and small-scale paintings that will be shown for the first time in public in the exhibition.

Activities such as tours to the artist’s old home and studio will also be organized.

April 1 to April 30: “This is London.” The Die Galerie Seoul will be hosting a two-person exhibition with the most promising young artists in London. Henrijs Preiss paints unusual works that are both old and new, exotic and familiar.

Having studied in the Academy System in Latvia and coming from a family of Latvian and Russian artists, Preiss has an in-depth knowledge of the compositional and spatial structures used in the creation of medieval religious icons.

Preiss takes these pre-Renaissance composition methods and combines them with 20th century abstract painting and cabalistic symbolism, resulting in works that are unusually balanced for abstract paintings.

He has been chosen as one of the representative artists of England by the Saatchi Gallery in London.

Matthew Small is an artist with strong urban roots. By painting directly onto found pieces of metal, he brings physical elements of the city directly into his work.

The people he paints are filmed anonymously on the streets of London. In this way, Small focuses on creating portrait painting at its best, when the identity of the sitter is of less importance than the power and insight of the piece. His first exhibition was held at Lefevre Fine Art in Mayfair - noteworthy in itself, as the gallery has been home to the works of some of England’s most famous representative artists, such as Francis Bacon.

This exhibition will gather 30 old and new works by these two young geniuses. It is the first international showing of their work in 2010.