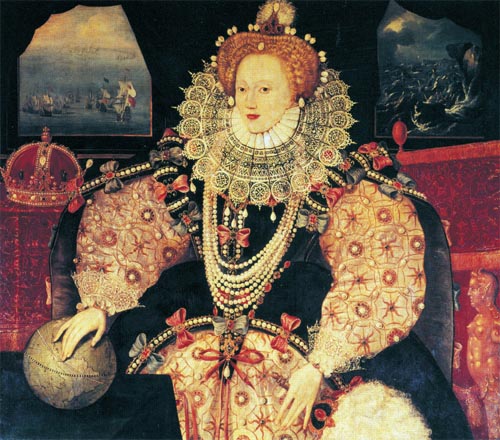 One of three existing versions of “Armada Portrait of Elizabeth I” (circa 1588), by an unknown artist

Elizabeth I of England (1533-1603) was not only an excellent monarch but also a top-notch advertising strategist.

In addition to spearheading the country’s rise to the tier of major world powers, she actively promoted her achievements. Some say she was essentially the first European monarch to recognize the importance of propaganda and actively use royal portraits to solidify support or rally her people.

At the very least, this is true of her majestic “Armada portrait.” In this painting, the queen dons elaborate lace, ribbons and countless strings of large pearls. It is said that she wore extremely splendid dresses like this to inspire others. She loved to wear pearls, in particular, because they symbolized purity and chastity, in keeping with her nickname “The Virgin Queen.”

In the background of the portrait are two windows showing significant events during her reign. The left window depicts the Spanish Armada confronting the English fleet. Spain, the strongest power on the high seas at the time, was prospering thanks to its intense focus on trade with the Americas. But England began taking an interest in the region as well, disrupting Spanish trade. As a result, Spain attacked England in 1588.

England defended itself using ships with excellent mobility and long-range cannons, striking a victorious blow on the Spanish fleet with a fire attack. The Armada hastily retreated but was further damaged by storms. The window on the right side of the painting depicts this turbulent scene.

In the portrait, the queen’s hand lies triumphantly on a globe. A closer look shows that her fingers cover the Americas - a statement that England, which emerged as a new naval power after defeating Spain, would exercise its influence in earnest in the New World across the Atlantic. English people at the time must have felt a surge of pride for their queen when they saw the painting. What an effective piece of propaganda this is! 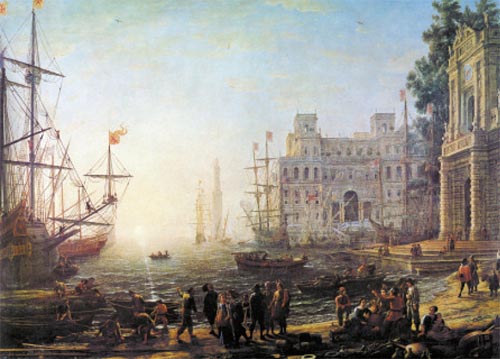 At the same time, the painting presents a good summary of Europe’s political economic situation during the reign of Elizabeth I. Europe was moving away from a feudal system where there had been little concept of nation or patriotism. National states were being formed, with absolute monarchs like Elizabeth I as their symbols. Each European country’s monarch - a globe in hand - was deliberating on how to secure more colonies for raw materials, how to develop industry and how to accumulate gold, silver and other precious metals through trade. It was a time of geographical discovery and mercantilism.

Mercantilism was not an integrated and systemized economic theory but rather a collection of ideas commonly shared by chief economic policy makers of nation-states between the 16th and 18th centuries. Additionally, the term mercantilism was not actually used by policy makers back then. Instead, classical economists such as Adam Smith who criticized the ideas and principles behind the concept adopted the term.

The absolute monarchs and economic policy makers at the time thought that the wealth of a nation depended on the amount of reserves of gold, silver and other previous metals the country held. Accordingly, they thought that the country’s trade account should be always in the black.

To them, international trade was a zero-sum game. In other words, one country’s surplus is another’s deficit, so there will always be nations on both sides of the equation.

Accordingly, merchants were proud of their positions in society and believed they were bringing dignity to their nations and monarchs. They commissioned paintings of harbor scenes and other images tied to their lives from renowned artists, and these developed into a genre of paintings.

Claude Lorrain (1600~1682) was excellent in this genre. His “Port Scene with the Villa Medici” painting displays a noble atmosphere of merchant ships at anchor in the port, with the sunlight highlighting their magnificent masts.

The essence of mercantilism can be seen in the policies of Jean-Baptiste Colbert (1619-1683), a government official under Louis XIV of France. He was simultaneously the finance minister and the minister for the navy, showing how important overseas trade was at the time. The popular portrait painter Claude Lefebvre (1633-1675) depicted Colbert holding documents that looked like maps with a globe behind him. 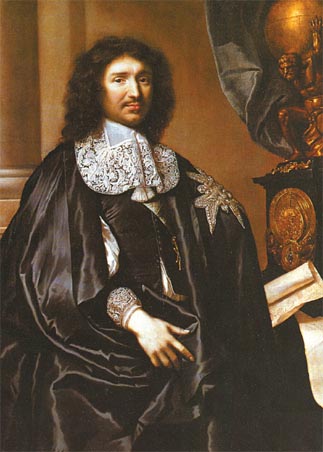 Colbert thought that it was important to urge domestic manufacturers to produce competitive goods for the sake of a trade surplus.

Accordingly, he welcomed the flow of foreign laborers with special skills into France while strictly banning the outflow of domestic technologies.

He also granted special favors to a few manufacturers and traders so that they could grow fast to surpass their foreign counterparts. Colbert put regulations on minor manufacturers’ entrance to the market to prevent a deterioration in quality. He also led the refurbishment of transportation networks such as roads and waterways.

The policies of Colbert did in fact contribute to the economic development of France. But special favors and barriers brought about complaints from manufacturers and merchants who didn’t receive those perks, and reduced opportunities for free competition. This ultimately weakened the competitiveness of domestic industries, economists of the 18th century argued.

Colbert also levied high tariffs on foreign imports to protect French industries. In retaliation, other counties put high tariffs on French goods. The tariff war led to an attack by Louis XIV on the Netherlands in the late 17th century, which is now called the Dutch War.

France’s gold and silver reserves evaporated as the country incurred mounting expenses related to the war. Later, economists of the 18th century criticized Colbert’s trade policies, saying that free trade without barriers leads to an efficient division of work worldwide and helps each country’s consumers purchase goods at lower prices.

According to classical economists, international trade is a win-win - not a zero-sum - game. With the emergence of such laissez-faire economics, mercantilism gradually faded.

Today, mercantilism seems like an outdated idea. Few economists and general observers believe a nation’s wealth depends on its reserves of gold and silver. Still, Colbert’s measures to enrich his country resonate today. In fact, they have similarities with Korea’s economic development model of the 1960s and ’70s, which brought about the so-called “Miracle on the Han River.” Of course, this model cannot be applied in Korea these days, as the economy has already reached a certain level. However, economists still have mixed views about whether developing countries need mercantilist policies.

The war between mercantilism and laissez-faire ideas, it seems, continues to this day.