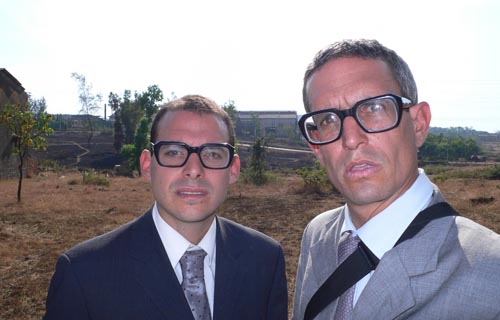 Andy Bichlbaum (right) and Mike Bonanno direct and star in the documentary “The Yes Men Fix the World.” Provided by Mi Media

Children fantasize about being superheroes. As we mature, we recognize this fantasy as a pipe dream: Human beings cannot shoot spiderwebs or knock down a bridge with one blow. Saving the world can’t be done single-handedly.

Tell that to a pair of Americans who set out to become real-life superheroes, albeit the kind without supernatural powers. Mike Bonanno and Andy Bichlbaum call themselves the Yes Men, and they take on multinational conglomerates that dodge their ethical responsibilities to innocent civilians.

In their most famous exploit, the Yes Men took aim at the Dow Chemical Company for its failure to compensate the victims of the Bhopal disaster. In 1984, a poisonous gas leak at a Union Carbide plant in Bhopal, India, killed thousands of people, but when Dow Chemical took over the company, it declined to take responsibility for the 120,000 victims still in need of medical treatment.

Enter the Yes Men. The duo created a fake Web site for Dow that claimed that a $12 billion fund for the victims has been set up, then waited for someone to contact them. And soon the BBC did, interviewing the sham executives and airing the result. The Yes Men’s prank caused Dow’s stock to plummet $2 billion in 20 minutes - a seeming victory for the activists that was made hollow by the realization that the stock was held by pension funds, meaning they caused middle-class workers’ retirement savings to drop.

To mock the Bush administration, on Nov. 12, 2008, the Yes Men printed 10,000 copies of a fake New York Times edition, distributing the copies in Manhattan with a banner headline reading “The Iraq War Ends.”

Both these pranks are documented in “The Yes Men Fix the World,” a new film written and directed by Bonanno, Bichlbaum and Kurt Engfehr and starring Bonanno and Bichlbaum. The JoongAng Daily talked to Bonanno via e-mail. Here are excerpts from the interview.

Q. Growing up, did you or Bichlbaum have a fantasy about Superman? Batman? Or other superheroes? And what made you launch the Yes Men in the first place? Is there any reason that you target huge companies such as McDonald’s or Dow?

A. Andy and I may have had fantasies about superheroes ... but not about being them necessarily. I think I liked Catwoman and he was more into Robin.

We launched the Yes Men in the first place much by accident. Andy had put up a satirical Web site making fun of the World Trade Organization, and we were surprised that people wrote to the site thinking it was the real thing. We realized it was an opportunity when someone asked us to attend their conference thinking we were the real thing ... and that was more than 10 years ago: We have just kept doing similar things to this day.

For the first four years we were working as the Yes Men we stuck to impersonating the WTO, but then we moved on to other deserving targets. We have chosen our targets because they represent something particularly nasty about the way we regularly put profits ahead of people and the planet. In the case of Dow, they have tried to avoid being held accountable for the Bhopal catastrophe, one of the largest industrial accidents in history. In the case of Exxon Mobil, they funded efforts to convince the American public that climate change was not a problem. Both of these actions are criminal. We are sure there are also deserving targets in Korea. You tell us!

While I was researching the Yes Men and the film, I was wondering what kind of kid were you? Seems like you must have protected some friends who were being bullied in your school.

Quite the contrary, I think both of us were the kind of kids who kept a low profile. Although Andy did tell everyone the lie that his grandfather was the Ayatollah Khomeini (who at the time was seen as public enemy No. 1 of the United States). I don’t think that helped against bullying though.

How did you team up with Andy?

We met because we had done similar projects and mutual friends introduced us as a result. I had switched the voice boxes on some popular children’s talking toys (Barbie and G.I. Joe) and put them back on store shelves, creating a mass media spectacle when kids opened their toys on Christmas Day in 1993. That was called the “Barbie Liberation Organization.”

Meanwhile Andy, working for games company Maxis, programmed some unauthorized content in the game he was working on called “SimCopter.” When the company he was working for discovered that the game they had shipped 100,000 copies of also featured boys in swimsuits who kissed each other, they fired Andy.

But word got out to the press, and it too became a mass media spectacle. Our mutual friends suggested we work together, and that was back in 1996.

Is it okay to pretend to be a spokesperson of one company or make a fake Web site? Because you’re living in the United States, which is often called Lawsuit Nation. Don’t the Yes Men get sued?

There are a few answers to this. For one thing, from a legal perspective what we are doing is political speech - we are masquerading as these companies, but we do it to criticize them. It fits in the traditions of satire and in many countries around the world, including the United States, it is legal, or at least we think it is.

Secondly there are ethical and moral questions about what we are doing. We believe what we are doing is moral and just, because we are telling small lies that get at big truths. It is important to remember that some lies are in fact just and good.

Lastly there is a practical reason no major company has come after us. It is a risk for them to attack us, and they have lots of skeletons in their closet. If they attack us, it is open season on them. For the most part this has kept them at bay.

How do you organize and operate the Yes Men? How did you fund printing all those copies of the fake New York Times a couple of years ago?

We basically have had little administrative overhead, and have not had any real administrative structure. We have kind of survived from the salaries of our “day jobs” as university professors.

But some of the events we have funded through people on our mailing list - we raised the money to print The New York Times from people on our list, who contributed about $10,000 to make that possible.

In the future we do intend to grow a bit, and hire some people, for which we are now working on raising money. As far as members: We have about 100,000 people and the most that have helped on any one project are around 1,000. But anyone can join by going to www.theyesmen.org/join.

Tell us your ultimate goal as the Yes Men.

Our ultimate goal is to replace the current economic and social system with one that is sustainable, just, and plans for the future. The culture of capitalism has it in for us, and we need to stop it as soon as possible.