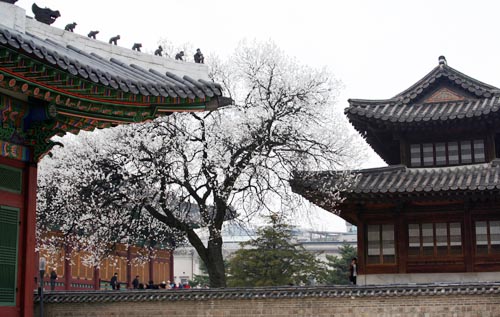 Apricot trees blossom last year on the grounds of Deoksu Palace in central Seoul. Provided by the Cultural Heritage Administration

A leisurely stroll around town during the peak flower viewing period is an early spring ritual for many.

The ephemeral nature of the blossoms themselves means those so inclined have only a small window of time in which to enjoy themselves.

It’s almost time to stroll around the grounds of Korea’s palaces and take in the sights, sounds and scents that the royal class enjoyed during springs of the past.

Although it’s still early, royal palace officials said several fragrant spicebush trees are blossoming, but visitors will have to wait a few more days before the other flowers catch up to the early bloomers. 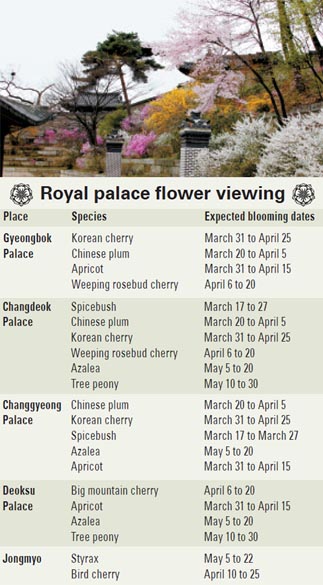 The unusually cold spring weather has delayed blossoming somewhat, but spring is just around the corner. As it always does about this time of year, the Cultural Heritage Administration released the dates when flowers are expected to bloom at the royal palaces in the central Seoul area.

The first things to blossom were the spicebush trees at Changdeok Palace last week. Colorful apricot, Chinese plum and Korean cherry trees, among others, are expected to bloom later this month to early April around the royal palaces in the central Seoul area.

A trip to the palaces will not only provide the beauty of bright flowers set against the backdrop of the ancient royal structures of the Joseon period (1392-1910), but can also reveal some interesting tales about the daily lives of the royal class in the gated grounds of the palaces.

“The prevalence of Korean cherry trees on the Gyeongbok Palace grounds is largely due to the fondness King Sejong [1397-1450] had for the trees,” explained Park Sung-jin, a professor at Kyungpook National University and an expert on royal palace trees in Korea. 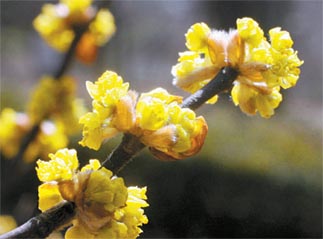 Known as a filial son, Munjong would himself pick the ripe fruits off the trees and wash them four to five times before serving them to his father.

Apricot trees were favored for their healing power and medicinal value.

The seeds were considered a cure-all in traditional medicine, which had more than 200 uses for them.

“According to “Goryeosa” [or “History of Goryeo”], a sickly Emperor Munjong in 1078 asked for medicine from the Chinese Song Dynasty. A delegation that included a medical practitioner and medicine was sent, along with 10 bottles of special liquor made with apricot seeds,” said Park. 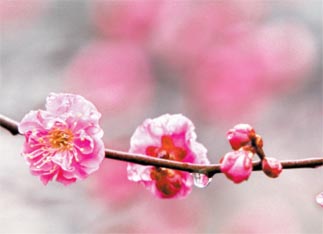 While some tree species hold special meaning in the history of the royal palaces, as Park explains it, ancient court records show that the species currently seen in what are now Seoul and Gyeonggi were planted on the grounds of royal palaces.

There were also types of trees which were forbidden from royal palaces: Those with thorned branches or hollow trunks could not be planted in the grounds, because those properties could not be associated with the king.

Korea’s tree population has changed throughout the years.

One example is the red Japanese maple trees at Changdeok Palace, which were planted during the Japanese colonial era (1910-1945).

“Not too many trees from the ancient past exist on the palace grounds. Most of the existing trees on the royal palaces were planted during the restoration period of 1984-85,” said Park.

“I would have to say Changdeok Palace is the only remaining royal palace with some trees from before that time.” 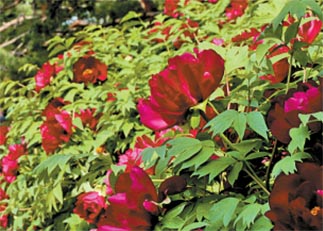 For spring flower viewing, timing is of the essence. According to the initial reports released by the Korea Meteorological Administration in February and early March, flowers are expected to bloom later this year than they did last year.

Unexpected changes in weather patterns can delay blossom dates, and the recent spring cold snap pushed the dates back.

“The overall expected dates will be delayed by an average of two days around the country and by a day in Jeju Island,” said Chun Jun-seok, director of the Climate Prediction Division at the administration.

Although many believe that Korea has had an unusually cold winter and spring, with the longest cold snap lasting for roughly three weeks between mid-December to mid-January and another stretch of cold weather in early spring, Chun says this year is not that different from past winters.

“In the past, cold winters averaged temperatures of 15 to 17 below Celsius [5 degrees to 1 degree Fahrenheit]. In comparison, this winter temperatures averaged 13 to 15 below. In that regard, it’s not too far off the norm. The difference is in the recovery period,” stated Chun.

“Usually recovery periods of two to three warm days follow cold snaps, but the cold temperature persisted for an extended period of time this winter and spring, making it feel colder than usual.”