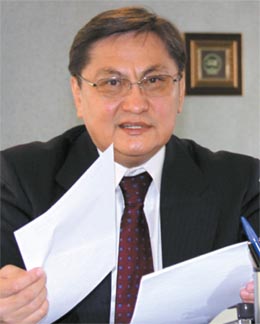 To celebrate the 20th anniversary of diplomatic relations between Mongolia and Korea, Mongolian Ambassador to Seoul H.E. Gerel Dorjpalam spoke recently about bilateral relations and cooperation between the two countries.

Q. At the moment, what is the most vital issue in bilateral relations between Mongolia and Korea and what are some of the achievements we’ve seen on the cooperation front?

A. Exactly 20 years have passed since the establishment of diplomatic relations between Mongolia and Korea. The early 1990s marked the start of a new era for Mongolia when it chose to implement a free market economy and democratic system, and Korea was one of the first countries to establish diplomatic relations with Mongolia as a result of its new foreign policy. Our countries have a history of bilateral relations dating back hundreds of years. We don’t have any political issues or unresolved misunderstandings. Many new issues will of course arise in the future, and those issues should be taken into account immediately.

What is the most promising sector for bilateral cooperation?

I think our relations can be divided into three stages. The first stage covers the historical period before 1990 when cooperation was limited to some cultural, scientific and sports exchange only. Since 1990, Mongolia initiated the establishment of a diplomatic relationship, creating enhanced bilateral cooperation. I expect that the third stage will start this year as we accelerate and intensify the development of our existing cooperation and relationship. Next year, we are going to establish mid-term cooperation goals and sign a policy paper that outlines a strategy to further our bilateral relationship. There is huge potential to expand cooperation in many sectors. Korea has huge investment potential due to its highly developed economy and technologically advanced industrial base. On the other hand, our country’s economy is based on agriculture and natural resources. We therefore see an opportunity to build up mutually beneficial cooperation.

Can you talk about Mongolia’s foreign policy strategy in general? 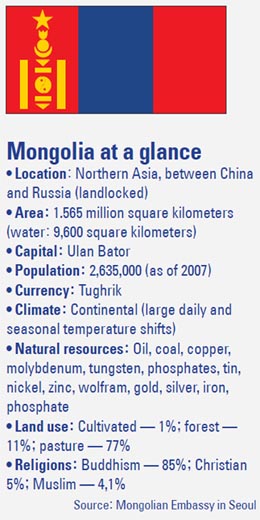 Mongolia adheres to a special concept called “the third neighbor.” As a small country neighboring two giant nations, it is of course very important to have a good relationship with Russia and China. However, we also need to have some other pillars from “third neighbors” such as Korea and the United States. Korea is absolutely one of our biggest third neighbors.

The Oyu Tolgoi Investment Agreement, which was signed last year, is expected to pave the way for an increase in foreign investment activity in Mongolia. Is there any possibility that Korea and Mongolia can enhance bilateral cooperation in this area?

The signing of the Oyu Tolgoi Investment Agreement was a very historical event. During the last few years, the government of Korea has intensely expressed its interest in investing in the Mongolian mining and power generation sectors and cementing related partnerships. The state-run Korea Resources Corporation Consortium has also been proposing the idea of participating in our Tavan Tolgoi project.

Having acquired the best technologies for infrastructure development in the areas of civil engineering, railway transportation, industrial power generation and steel processing, among others, Korea has become one of the world’s leading investors. My intent is to fully capitalize on this opportunity while the country is offering a very attractive proposal for cooperation.

The complex proposal initiated by Korea covers not only the exploration of our natural resources, but also the development of infrastructure and the construction of processing factories.

Additionally, it includes bringing in new technological know-how and building satellite cities, which sets the country’s proposal apart from others.