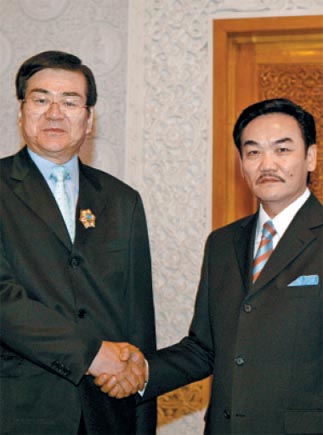 Hanjin Group is taking the lead in strengthening the friendly relationship between Korea and Mongolia. The conglomerate first cemented its ties with the country in 1992 after Mongolia shifted to capitalism. To mark the occasion, former Hanjin Chairman Cho Choong-hoon donated a Boeing 727 passenger plane to the country.

The friendly relationship has endured for nearly two decades and continues to grow to this day.

Cho Yang-ho, the current chairman of Hanjin Group, is actively promoting relationships between the private sectors of each country. The plane donation went a long way toward creating a bond between Korea and Mongolia. It ranked as one of the first efforts to support the country at the time by the outside world. Additionally, it helped the country educate and train aviation professionals in various areas including airline maintenance.

As an expression of thanks, the Mongolian government allowed Korean Air flights to and from Europe to pass over its airspace, which in turn reduced flight time and further helped improve relations.

The move also helped pave the way for Korean Air - which is part of Hanjin Group - to start regular flight between the Mongolian capital of Ulan Bator and Seoul starting in 1996. Almost a decade later, the group helped create a massive, 230,000-square-meter forest with 36,500 trees near Ulan Bator. The support continues today, as each year new employees conduct environmental activities at the forest in an effort to boost preservation awareness efforts. In May 2009, the company even received a preservation award from the Mongolian government for its work in planting trees.

Aside from this effort, the company also provides scholarships to Mongolian students under various programs. Under one such program, the group selects five students from Mongolia every year and brings them to Korea to study.

The group also provides students with the opportunity to learn about the business world by visiting its local facilities.