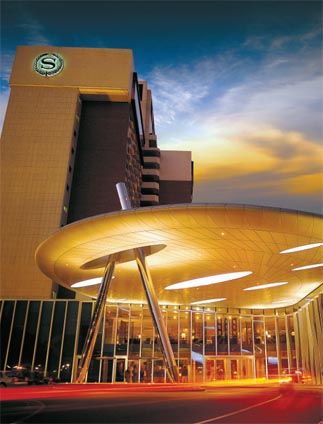 The Walkerhill Theatre will host a new show called “Legend of Flower” - which features traditional Korean performances with a contemporary flair - starting on April 5. The photo above shows the Sheraton Grande Walkerhill.

Throughout its history, the renowned Walkerhill Theatre has received an avalanche of accolades from prestigious names in the performing arts scene. This year, the theater is taking it to the next level by presenting a blockbuster new cultural show that starts on April 5.

The Walkerhill Theatre is proud to introduce its original traditional Korean production “Legend of Flower.”

The performance features four overarching themes: flowers, water and fire, wind, and golden earth. Each scene is filled with fantastic sounds, fragrant aromas, vibrant three-dimensional videos and additional high-tech effects in an effort to stimulate the senses. Moreover, this contemporary show includes traditional elegant fan and spirit-cleansing dances along with a customary wedding scene and a traditional tightrope dance - all of which will surely mesmerize audiences. To add a contemporary edge, the show features a dynamic and talented B-boy dance performance and an intense martial arts sequence.

This one-of-a-kind show, which cost more than 6 billion won ($5.3 million) to produce, is a large-scale production, featuring 60 performers.

Legend of Flower is a compelling, romantic tale revolving around two lovers, Ara and Mir. Audiences will be captivated by the power of their love as they overcome adversity and the evil Mamawang’s conspiracies, leading to a happily-ever-after wedding.

The opening act kicks off with the entrance of “three witty clowns,” and a celebratory festival begins with ethereal flowers showering down from the sky above. 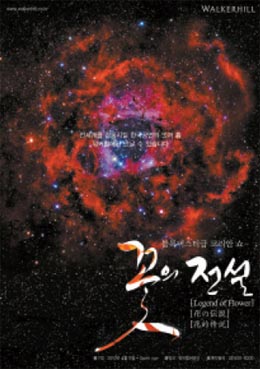 The first act, “Festival of Flowers ? Rendezvous,” shows how the two main characters fall in love at first sight. Amid the warm spring weather, a celebration of their new-found love commences. The main male character, Mir, risks his life to retrieve a beautiful, red camellia for Ara on a steep cliff. Hearts will flutter as Ara performs a mesmerizing flower dance, while Mir executes a traditional gourd dance reminiscent of a butterfly searching for the perfect flower.

In the second act, “Water and Fire ? Love,” the love between Ara and Mir becomes as passionate as a scorching summer afternoon and as powerful as a monsoon. To portray their feelings, Mir performs a thumping percussion instrument dance, while Ara executes a captivating Indian Barachum dance. As an exciting boat ride enhances the festival, Ara and Mir’s love begins to grow deeper. But the evil Mamawang enters and abruptly takes Ara away.

The third act, “Wind ? Adversity,” portrays the challenges Ara and Mir encounter, reflecting the chilly nature of fall weather. Longing to be saved, Ara performs a Salpuri-chum (a spirit-cleansing dance) while holding a red camellia. This, however, has no effect on Mamawang’s soldiers. But Mir arrives with his warriors, who execute a taekwondo sequence. This leads to an action-packed battle between Mir’s warriors and Mamawang’s soldiers. In the end, Mir and his warriors destroy Mamawang’s castle and succeed in saving Ara.

In the final act, “Golden Earth - Wedding,” the fields turn a brilliant shade of gold after Ara and Mir overcome their adversities. An assortment of lamps symbolizing peace and happiness surface during Ara and Mir’s wedding ceremony. Joyous pungmul (Korean percussion instrument) music and jibulnori (a traditional fire game) are performed during the celebration. Following the wedding, an elaborate reception with percussion instruments ensues. The finale features a dynamic and exhilarating tightrope act as the show’s cast makes its way onto the stage for a grand curtain call amid red camellia petals, capping of the performance in dramatic fashion.

The renowned production team behind the show includes prominent stage designer Park Dong-woo, who has been recognized for his innovative musical sets for “The Last Empress” and “Hero”; director Jung Ho-boong, a professor at Chungang University; and celebrated composer Kim Tae-geun, among others.

This unique open-run show lasts approximately 85 minutes and includes dinner featuring savory Korean cuisine. Shows will be held at 5 and 7:30 p.m. daily from Monday through Saturday.