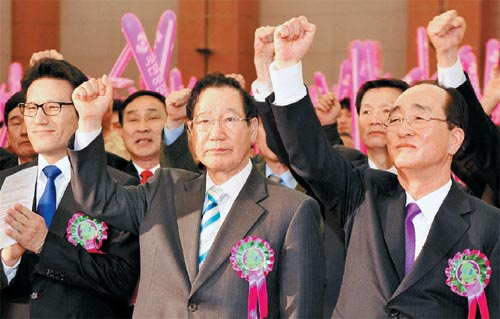 Rhee Q-taek, center, co-head of the Grand National spinoff Solidarity for Future and Hope, and Sim Dae-pyung, right, former chairman of the minority conservative Liberty Forward Party, announced yesterday they would complete a coalition “in the very near future” at the Kim Koo Museum & Library in Hyochang Park, Seoul. [NEWSIS]


Minority conservative leaders said yesterday they would join hands ahead of local elections in June. The move was an apparent response to a proposal made Wednesday by a minor conservative leader to unconditionally merge with the ruling Grand National Party.

Rhee Q-taek, co-head of the Grand National spin-off Solidarity for Future and Hope, and Sim Dae-pyung, former chairman of the minority conservative Liberty Forward Party, announced yesterday they would complete their coalition “in the very near future.”

Sim bolted Liberty Forward last fall and formed a new minority party named the People First Union. Rhee had been the co-head of the Solidarity party with Suh Chung-won, who is currently in prison. On Wednesday, Suh urged his party not to nominate candidates for the June 2 elections in order to ensure conservative victories.

Solidarity used to be called Pro-Park United, a group of lawmakers supporting former GNP chairwoman Park Geun-hye. Suh had said Wednesday that the founding goal of United was to essentially get out of the way and clear the path for GNP success. But Rhee said yesterday that not everyone in Solidarity would like to see a merger with the GNP. Solidarity has eight lawmakers.

“I’ve already discussed [my merger proposal with Sim] with Suh,” Rhee said. “There are people [within Solidarity] who don’t want to merge with the GNP. If there has to be a merger, then everyone has to be part of it. The GNP is trying to kill Solidarity now.”

“We will try to get [our merger] in the next week or two,” Rhee added. “Suh would try to dissolve Solidarity but we’re confident we’d be able to unite with [Sim’s party].”

Sim could wield some influence in the Chungcheong region, which has emerged as a key battleground amid political strife over the Sejong City development plans. Sim is a native of Gongju, South Chungcheong.

The conservatives’ moves for mergers have come as the opposition parties have discussed forming a coalition to nominate joint candidates in hopes of raising their chances of winning. The main opposition Democratic Party has called Suh’s move “a black market deal.”