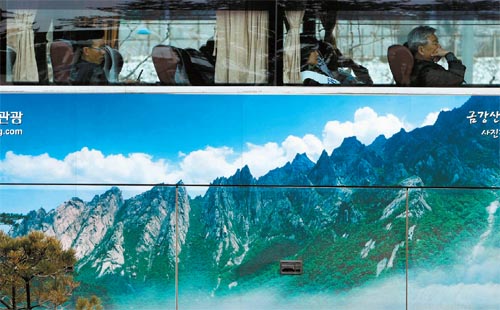 Some business representatives who could not travel to Mount Kumgang wait on a chartered bus yesterday at the Customs, Immigration and Quarantine Office in Goseong, Gangwon. Meanwhile, Hyundai Asan officials and some investors who own real estate in the North Korean resort area traveled there in response to the North’s call for investigations into South Korean owners of real estate holdings. The South’s Unification Ministry denied entry to 12 businessmen who do not own property in the Mount Kumgang area. [YONHAP]

Choi Yo-sik, an official representing interests of South Korean companies at the resort, said Lee Kyong-jin, an official from the North’s Myong-seungji General Development Guidance Bureau, informed the companies of the threatened actions.

Choi and other officials of South Korean companies that own facilities at Mount Kumgang traveled north of the border yesterday in response to the North’s declaration last week that all assets would be confiscated if they missed the March 25 deadline to attend the examination of South Korean properties.

“Lee told me that the survey was taking place because Mount Kumgang tourism has been neglected for too long,” Choi told reporters as he returned south of the border. “Lee said he himself didn’t know what these extreme measures would be.”

The North has been pressing to restart the suspended tour programs to the resort and last week threatened it would seek a new tourism business partner unless the South agrees to resume the tour in April.

The program was suspended in July 2008 after a female South Korean tourist was shot dead by a North Korean soldier in a restricted zone.

Also yesterday, North Korea said it would investigate the visitors’ center for separated families, owned by the South Korean government, at the Mount Kumgang resort.

The South, however, has another point of view.

“The visitors’ center has nothing to do with Mount Kumgang tours,” said Unification Ministry spokeswoman Lee Jong-joo. “We have no plans to cooperate with the North’s survey.”

The center opened in July 2008. It was designed to hold reunions for families separated during the Korean War.

But with deteriorating inter-Korean relations, only one such session has taken place.

The North also announced the schedule for surveying other facilities at the resort, such as hot springs, a duty-free shop, hotels, restaurants and a golf course.

The examination will begin today and wrap up next Wednesday.

The Unification Ministry has maintained that it would not resume tourism without an official apology and security assurances from North Korea.

A high-ranking official said yesterday the North’s recent threats were “regrettable” and were against protocol.

Apparently strapped for cash following a botched currency reform, the North has been anxious to restart the Mount Kumgang tour program.

The two Koreas held talks in February on resuming the tours, but failed to reach an agreement.