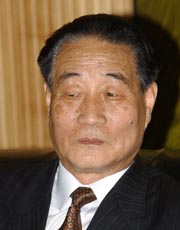 Pak Nam-gi, a former top North Korean economics official who reportedly has been executed, has been edited out of North Korean documentary films, the JoongAng Ilbo has learned.

From Feb. 24 to March 2, and again on March 19 and 20, North’s Korea Central Television aired a documentary of Kim Jong-il’s field inspections to factories and farms last November. Pak was spotted four times in the broadcast between Feb. 24 and March 2. However, parts where Pak appeared in the background were all deleted from the same film that aired on March 19 and 20.

“As far as I understand, the North ordered Pak’s appearances to be edited out of all documentaries,” a Seoul government official said.

According to a North Korean defector, North Korean documentaries showing Kim’s trips “are meticulously produced and thoroughly reviewed before they are broadcast.”

“It’s unusual for such a documentary to be re-edited,” the defector said.

Last week, Seoul-based North Korean news Web sites and Yonhap News reported that Pak had been shot to death in a public execution in Pyongyang a week earlier. The Unification Ministry in Seoul refused to verify the reports.

Pak, former head of planning and economy at the ruling Workers’ Party, was reportedly held accountable for his role in last fall’s botched currency revaluation. Sources say the currency move caused inflation and starvation, leading a disgruntled public to stage riots across the North. In February, Pak, who had been last seen in January, was thought to have been dismissed from his party post.

Jin Hee-gwan, professor of unification studies at Inje University, said earlier this week that it is likely that Pak was executed: “In North Korea, people who have been executed or are held in camps for political prisoners are often deleted from documentary films and photos.”

In 1997, North Korea edited clips showing So Kwan-hi, then Workers’ Party secretary for agriculture, and Kwon Hi-kyong, head of party external affairs, after they were executed. Pak accompanied Kim Jong-il on 77 occasions last year, the third-highest total among North officials. In November alone, Pak followed Kim on nine of the leader’s 19 inspections.

At least one North Korean official has indicated that government officials would be held responsible for the currency reform. Ja Song-nam, the North Korean ambassador to the European Union, said last week, “The currency reform did fail in some regards early on, and that was due to corruption by some bureaucrats.”