Experts: Weird weather not so rare

Experts: Weird weather not so rare 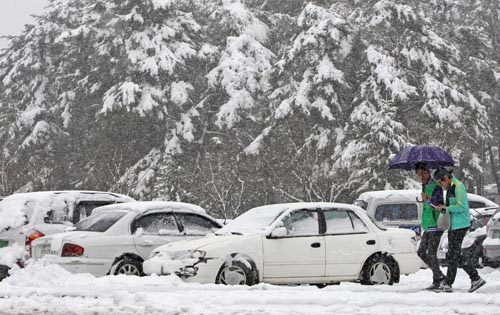 Students at Kwandong University walk on the campus yesterday while another late-season heavy snowfall hit the Gangwon area. [YONHAP]

Yellow dust and strong winds from China last weekend followed by an unexpected snowfall on Monday may prove the American adage “If you don’t like the weather, just wait a few minutes.” But in Korea, the bizarre weather is raising eyebrows.

While the ups and downs may be worse this year, there’s nothing new under the sun, according to meteorologists.

“The weather in March always used to be fickle, that’s not new. It’s just that this year it’s been especially capricious. The changes have been severe,” said Oh Jai-ho, an atmospheric sciences professor at Pukyong National University.

Severe indeed. After rains in late February, the month opened with eight days of snow in the eastern part of Gangwon that in Daegwanryeong piled up a meter (3.2 feet) high, and 13.5 centimeters of snow fell in Seoul on the night of March 9 through dawn of March 10.

The cause is cold air from Siberia colliding with warm air from the south, resulting in precipitation over the Yellow Sea.

“Although the overall temperature in the country is rising, cold air originating from the high atmospheric pressure in the north brought the snow to Korea,” Oh said.

“Neither the cold air from the north nor the warm air from the south has given way to the other yet, and that’s why the changes in the weather have been so frequent. The location of atmospheric pressure is changing rapidly, too,” said Jin Ki-beom, an official with the state-run Korea Meteorological Administration.

Jin added that the fickle weather could continue until early April as Korea remains under the influence of high atmospheric pressure from Siberia. “In these circumstances, weather forecasters should remain nervous until April,” he said.