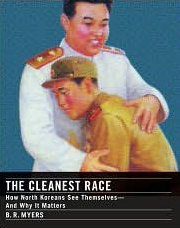 After two years of working for a Japanese newspaper’s Washington bureau covering United States policy toward North Korea, I fancied that I learned a pretty good amount about the place. After all, I was following the issues on a daily basis, talking to the experts who had studied it or interacted with its leaders for the better parts of their careers.

But B.R. Myers seems to have a message for the folks who think they have North Korea figured out: You don’t. And this is aimed at a lot of the players in Washington and elsewhere in the West who, for all their expertise, don’t actually understand the Korean language.

In “The Cleanest Race: How North Koreans See Themselves and Why It Matters,” Myers analyzes propaganda from the Hermit Kingdom, draws conclusions about its society’s worldview and tries to explain leadership decisions that often don’t appear helpful to anybody.

One of Myers’s primary objectives is to knock down the conventional wisdom that North Korea is a communist country. If you go by a simple dictionary definition of the word communism - “a totalitarian system of government in which a single authoritarian party controls state-owned means of production” - it might seem adequate to describe the place, but Myers thoroughly demonstrates just how far North Korea has veered from the countries that once adhered to Marxist-Leninist doctrine.

So what about North Korea’s juche ideology? Myers argues that this, too, is a canard sown both the regime and by Western scholars who conclude it is “inaccessible to the non-Korean.” To this, Myers responds, “As if North Koreans were not as baffled by it as everyone else!”

Instead, he argues, North Korea’s ideology isn’t about economics, it’s about racism: “The Korean people are too pure-blooded, and therefore too virtuous, to survive in this evil world without a great parental leader.”

We’re taken back in time to the colonial period under imperial Japan to see where this view was first given currency. The Japanese, in their attempts to subdue the local population, brought the Koreans into the idea that the two comprised a unique, pure race. Eventually, ideas and symbols originally Japanese were transferred to contrived Korean analogues, and race-based nationalism thrived in the North under Kim Il Sung.

So what does this mean for us today? Citing numerous North Korean primary-source documents, Myers argues that an ingrained sense of racial superiority - as well as a notion that the Koreas, as pure and virtuous as they are, ought to be spontaneous and childlike - will continue to pose great challenges for the rest of the world (indeed, it’s the conscious effort within the propaganda machine to promote “spontaneity” to which Myers attributes the 2008 killing of a South Korean tourist at the North’s Mount Kumgang, as well as the infamous DMZ axe murder of an American soldier in 1976).

The book also makes careful observations about the divide between the propaganda delivered in English through the Korean Central News Agency and what’s fed to the audience back home. It appears quite large, and Myers shows us when the messages are mixed, and how we might interpret that.

You come away with a great appreciation for just how much important work the North’s propaganda bureau does. Even these days, with outside information about the South’s relative prosperity sneaking across the border, it’s made to work to the North’s advantage: Those in the southern Yankee colony lead such empty, consumerist lives!

The Cleanest Race: How North Koreans See Themselves and Why It Matters