A towering symbol of Korean independence

A towering symbol of Korean independence 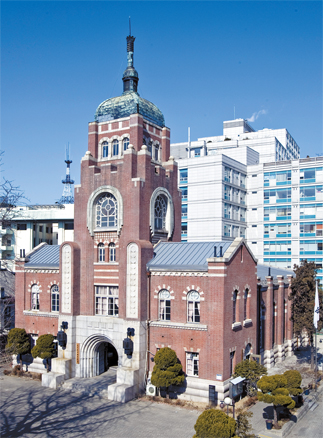 The Central Temple of Cheondogyo is a four-story antique building near Anguk Station in Seoul that was built in 1921; a monument erected when Son Byeong-hui published a monthly magazine, Children

The Central Temple of Cheondogyo stands opposite Unhyeon Palace near Anguk Station in Seoul. This four-story antique redbrick building is designated as Seoul City’s Tangible Cultural Property No. 36. The roof is baroque, while the imposing decorated front portal brings to mind a Gothic cathedral.

When it was completed in 1921, the temple was considered one of the three greatest buildings in Seoul, along with Myeongdong Cathedral and the Government-General Building. Today, it is a place where religious rituals, political rallies, art performances and other public events are held.

Its construction was ordered by the third chief priest Son Byeong-hui and funded by donations from Cheongdogyo adherents. The building was designed by a Japanese architect called Nakamura, and its construction was carried out by Zhang Shiying from China.

Both the interior and exterior are adorned with the image of a birch tree and the rose of Sharon, also known as the mugunghwa, the national flower of Korea. The decoration was added later by Son and his followers in an effort to add national spirit.

Today the bulk of Koreans are either Christian or Buddhist, while less than 1 percent of the population affiliate themselves with Cheondogyo - literally the “Religion of the Heavenly Way.” The Korean religion of Cheondogyo is a 20th-century movement, which has its roots in the 19th-century nationalistic Donghak movement founded by Choe Je-u. It was Son who changed the name of the religion from Donghak to Cheondogyo in 1906, after Yi Yong-gu, one of the members of the Donghak Movement, joined the pro-Japanese organization in 1904 and willfully engaged in pro-Japanese activities. The name change was inevitable as Son wanted to distinguish his group from Donghak and Yi’s pro-Japanese faction.

The temple is considered a cultural heritage site of the March 1st Movement. Most people think that the movement arose from U.S. President Woodrow Wilson’s principle of national self-determination, but the hidden side of the story is more complex.

When Korea was deprived of its sovereignty by Japan in 1910, Son, together with other Cheondoists, pushed ahead with a national liberation movement and played a leading role in the March 1st Independence Movement against Japanese colonial rule.

The rectangular interior of the temple was built without a pillar; The main building of Cheondogyo

Son’s work started on June 19, 1912, with the Bonghwang-gak hall he built in Ui-dong, Seoul. There, he resolved to train an army for national independence. Within three years, he produced 483 religious workers who all played a leading role in the movement.

The group needed organizational power and funds. Son started fund-raising in the name of building a temple and received donations from 3 million believers, each of whom gave 10 won. Although the Japanese empire carried out nonstop sabotage, Son was able to collect a total of 5 million won, worth around 200 billion won ($175 million) today. Only 360,000 won was used in construction, which means the rest was used as March 1st Movement funds.

After the liberation, Kim Gu, the sixth and later the last president of the Provisional Government of the Republic of Korea, delivered a speech thanking Cheondogyo for financing the independence movement at the Central Temple of Cheondogyo.

Cheondogyo intertwined its fate with the nation throughout the time of hardship. Advocate Choe Je-u and his successor Choi Shi-hyung died martyrs. Son, the third chief priest, sacrificed his life for Korea when he fell sick after being imprisoned for participating in the independence movement. During the Donghak Revolution, 300,000 more believers died and tens of thousands of lives were taken away during the March 1st Movement. Forfeiting properties and nonstop oppression by the Japanese were harsh.

Although everything seemed to be falling apart, Son managed to continue his publications. He put out a general magazine, Gaebyeok, and many other works including New Women, Children, Students, Peasants, Cheondogyo Monthly News, New Man, Byeolgeongon and College Lectures on Self-Discipline.

On May 1, 1923, Son’s son-in-law Bang Jeong-hwan proclaimed the world’s first Children’s Day. The day was set aside to put into action the religion’s ideology: serve women and children like the god Haneullim.

Son built Bonghwang-gak, a hall in Ui-dong, Seoul in 1912 to train an army for national independence. Within three years, he produced 483 religious workers who all played a leading role in the movement. Photos by Shin Dong-hyun

The great influence of Cheondogyo inside and out of religious circles was possible due to its expanding congregation. In 1926, there were 200,000 Buddhists and 350,000 Christians, while Cheondogyo had around 2 million adherents.

However, after independence, the religion lost its momentum. According to the National Statistical Office, there were about 11 million Buddhists, 14 million Christians and a mere 50,000 Cheondoists in 2005. While Buddhism and Christianity grew 40 to 50 times in size, Cheondogyo dwindled away to a minority religion.

“The congregation shrunk for various reasons and because of changes in values, but soon luck will come to us,” said Kim Dong-hwan, 76, a head priest of the Central Temple of Cheondogyo. “The central tenet of Cheondogyo’s theology is the doctrine of Innaecheon, which means that humans are Heaven.

“It’s totally different from today’s religions that became secularized and materialized. If one serves each person as god and treats each living thing as Heaven, all things will be blessed with supreme bliss,” he continued as he expressed his distress at how improperly the current generation manifests the March 1st Movement spirit.

Son Byeong-hui didn’t see the finished Central Temple, but it was completed by the time he was buried. At that time, the Japanese empire took away 1,286,000 won, money collected by the sweat of the believers. But the Japanese exploitation stopped at materials. They could not take away the spirit of the people.