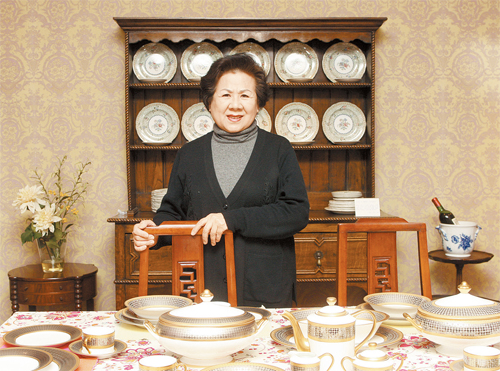 Bokjeon Yeongja stands by a table and china cabinet adorned with antique tableware at the Bucheon European Porcelain Museum. By Choi Jeong-dong

For many diners, a satisfying meal is best defined by the taste and quality of the food. But a host of other elements come into play as well, such as service and ambience.

And then there’s the tableware.

Restaurants that specialize in fine dining know the value of this often-overlooked part of the eating experience, putting a fair share of time and effort into finding plates and teacups that add a bit of elegance to the table. Many families also bust out the fine china or porcelain to mark special occasions or important gatherings.

Europeans have long paid particularly close attention to tableware, so much so that there’s even a museum in Seoul dedicated to porcelain from the region.

The Bucheon European Porcelain Museum displays a variety of porcelain and tableware that has captured the fancies of many people - especially those in the upper-class segment of society in Europe. The treasures stored here are not placed in glass cases like historic artifacts but are instead set on tables or arranged in antique china cabinets to create a more natural feel.

Behind it all is the museum’s head, Bokjeon Yeongja, who donated all the items on display and has been collecting porcelain for years. Bokjeon said her mother has long been interested in tableware. That initially created a bit of friction when Bokjeon was growing up. Her mother, after all, spent so much money on nice dishes that she often didn’t have enough left to give to her daughter to buy candy, Bokjeon said.

“When I was little I vowed never to touch tableware, but before I turned 20 my interest in it started to kick in subconsciously,” said Bokjeon, 65, who was born to a Korean father and Japanese mother. “I just started to collect them because they were pretty.”

Soon she was spending even more than her mother on the hobby. In fact, she once paid 17 million won ($14,807) just to move a vase made by the French company Sevres. Her collection consists mainly of European porcelain from the 18th and 19th centuries.

“At first, I bought a lot of fake pieces because I couldn’t really distinguish the good from the bad,” she said. “I shattered them all later on. Now I always buy them at Christie’s auctions, as their authenticity is guaranteed.”

Her own children have a difficult time understanding why she is shelling out so much money, and they certainly aren’t too happy when she tells them to eat carefully to avoid scratching the dishes.

But Bokjeon isn’t so sure about whether her kids will pick up the hobby. “The kids like plastic cups,” she said. “This kind of hobby probably won’t survive past my generation.”

Bokjeon has donated roughly 1,000 pieces to the Bucheon European Porcelain Museum. She has also donated porcelain to two other museums.

“When you have a certain number of pieces it’s better to donate,” Bokjeon said. “To keep them just to yourself doesn’t make sense anymore once you pass a certain point.”