A third generation serves and sacrifices in second motherland

A third generation serves and sacrifices in second motherland 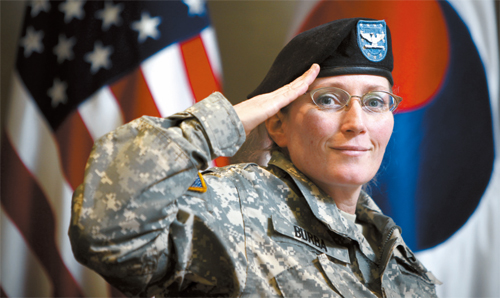 Col. Kathryn Burba salutes in front of the Taegeukgi, the Korean national flag, and the Stars and Stripes at Yongsan Garrison, central Seoul, on March 17. By Park Jong-keun

There’s a slogan South Korean and U.S. troops in the South use to show the bonds of friendship: “Katchi Kapshida!”, or “Let’s Go Together!”

And in the spirit underlying the motto, South Korean and U.S. military here have fulfilled joint military duties for the sake of each country’s interests for nearly six decades.

The family of Col. Kathryn Burba, 45, embodies that spirit.

For the Burba family, South Korea is not merely a temporary duty station, but a second motherland.

The colonel is the commander of the 501st Sustainment Brigade in the Eighth Army of the United States Forces in South Korea, headquartered at Camp Carroll in Waegwan, North Gyeongsang.

And she’s the third generation of her family to serve in South Korea.

Now it is Burba’s turn to serve her motherland as well as South Korea.

In her third tour of duty in South Korea, Burba is commanding some 2,000 U.S. troops and Korean Augmentation Troops.

She said she has such deep affection for the South that all three missions here have been voluntary.

Her grandfather, Edwin H. Burba, fought during the Korean War in 1952 as the commander of the U.S. Third Infantry Division. He came back to South Korea for a second time in 1964-66 as the chief of the Military Advisory Group of the U.S. Forces in South Korea. He was killed in a plane crash in 1970 while on active duty.

Gen. Burba retired as a four-star general in 1993.

Col. Burba is his second-born child among three daughters.

Burba said she started dreaming of becoming a soldier when she was 5 years old, when she first saw her father doing parachute jumps during training in 1970.

“My mother told me that I said, ‘I’m going to do that when I grow up,’” she said. “At the time, female soldiers were not common. So my mother taught me all kinds of etiquette to serve guests as the potential wife of a military man.”

Her passion for military life got stronger in her teens and continued unabated through her undergraduate years at Colorado State University, where she at last volunteered for the Reserve Officers’ Training Corps.

“My father supported me a lot, and he even came to my commission ceremony in 1987,” Burba said.

It wasn’t hard for her to get used to military culture after joining the army because she’d been raised in a military family, she said.

Her uncle was a medical officer and her younger sister married a U.S. Air Force pilot. Some family members on her mother’s side are serving in the U.S. Navy.

And she was able to learn about Korea from her grandmother, who she said had so much love for the culture that she designed most parts of her home’s interior using traditional Korean furniture. Her grandmother even used to stuff candies inside a drawer that was secured with a fish-shaped lock.

“My grandmother especially loved to help orphans. And because of her influence, my uncle adopted three Korean children,” she said. “One of them is currently an aide working in the House of Representatives [in the U.S. Congress].”

Pride in her duty

Burba has served three different commands in South Korea in her military career. The first two commands took place back in 1993-1995 and 2004-2006, when she was company commander and battalion commander, respectively, at Camp Casey under the U.S. Second Infantry Division in Dongducheon, Gyeonggi.

“I was so familiar with Korean society at the time. Since then I’ve become so fascinated with South Korean tradition and culture that I learned oriental medicine,” she said. “I really enjoyed strolling down fields and climbing mountains here. Like my grandmother, I decorated my house in Korean style. There are many Korean calligraphic artworks hanging on the walls. I bought my bed from an antique furniture shop in Korea.”

Burba said she is scheduled to be dispatched to Afghanistan in June. It’s another mission for which she volunteered.

“I’m a soldier. Soldiers serve their country sincerely. It will be a tough one-year mission in Afghanistan. But at the same time, I expect to gain something from working there,” she said. “I am going to be in charge of managing logistics and supply in Kabul [Afghanistan’s capital]. I want to take advantage of my arms knowledge and expertise in the battlefield to serve my country,” she said.

Burba believes that hardship makes one grow. She has already volunteered for tough positions, such as serving in the Gulf War in 1991 and as an aide to the U.S. secretary of the army at a time when it was so rare for female soldiers to be in that position that her appointment was covered by The Washington Post.

She says it will be the South Korean people she will miss most when she leaves the country.

The colonel praised South Koreans for being competent, hard-working and warm. She said she will also miss Korean food and jjimjilbang (Korean-style 24-hour sauna).

When asked about the Korean War, Burba grew serious. She said it is unfortunate it’s becoming “The Forgotten War.”

“The Korean War must not be forgotten. We must not forget those who shed blood,” she said. “I hope many people will think about the lessons of the war as this year marks the 60th anniversary of the outbreak.”