Giving unwed mothers a chance for a future

Giving unwed mothers a chance for a future 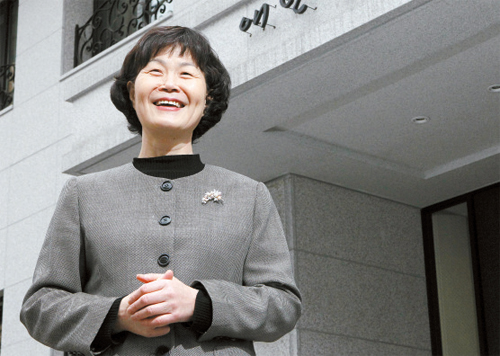 Director Han Sang-soon of Aeranwon, a Presbyterian church program that runs a facility for unwed pregnant mothers and children. By Kim Kyung-bin

Nineteen-year-old Kim Su-hyeon was forced to drop out of her senior year of high school in Ganghwa, Gyeonggi, after she became pregnant last year.

She gave birth to her daughter in December, and it looked as though her educational career was over.

Then the National Human Rights Commission stepped in, and ordered the school to re-enroll the teenager.

Now she’s graduated and has entered college - and the commission has taken steps to ensure that what almost happened to her doesn’t happen again.

On March 16, the commission announced that forcing pregnant students to drop out from school discriminates against their human rights to an education.

For Han Sang-soon, the director of Aeranwon, a Presbyterian church institution that runs a facility for unmarried pregnant women and their children in Seodaemun District, western Seoul, the decision meant more than Kim’s future. It was a step to breaking down the barriers that face unwed mothers.

Han has been involved in advocating rights for unwed pregnant women in Korea for 28 years. She stressed that unwed pregnant teenagers can stand on their own feet only when they complete their education and get a job.

“Only self-reliance can cut the vicious cycle in which unwed pregnant teenagers get pregnant again after they give birth,” Han said. “If they can’t stand on their own feet, their children grow up in dire straits.”

When Han first approached the school to ask that Kim be re-enrolled, the teachers were furious and strongly opposed the idea, Han recalled.

“They said, ‘How can we possibly accept a pregnant student in the school?’” Han said. “I learned through the experience that’s why teenagers decide drop out when they get pregnant. Many unwed pregnant teenagers who come to Aeranwon are school dropouts because they say in order to not get kicked out, quitting is the only option. It’s heartbreaking.”

Han’s center originally couldn’t afford academic education, and centered instead on providing vocational training for the young women. But many failed to carve out a stable living because their lack of education disqualified them from the jobs they wanted.

“Many ended up getting labor-intensive work,” Han said. “Many of them ended up quitting because they were not only physically exhausted, but also unhappy with their job.”

“Providing educational opportunities to unwed pregnant teenagers is necessary,” she said. “It will enable them to get decent jobs, and that prevents them from passing on poverty to the next generation.”