He’s put hansik on the table

He’s put hansik on the table 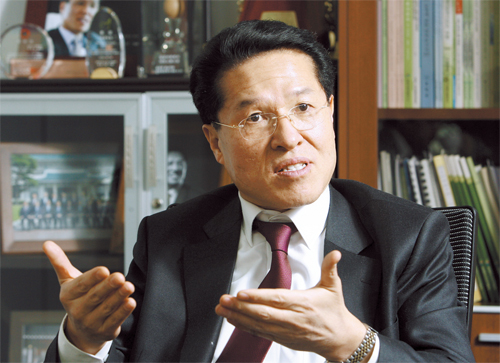 Chung Woon-chun is probably the best-known agriculture minister the country has ever had.

After taking over the top seat at the ministry in March 2008, Chung quickly had to weather the intense public fury and months-long nationwide rallies over the government’s plan to fully resume U.S. beef imports.

After a flurry of hearings that lasted months and debates and demonstrations where he had to defend the government’s decision amid relentless criticism from lawmakers and the public alike, he finally stepped down from the seat in August 2008, less than six months after he took the helm.

But a year and a half later, Chung is back in the limelight - this time as the first chairman of the Korean Food Foundation.

The state-run foundation, which officially kicked off on March 17, was created to spearhead the government’s newfound mission to promote and “globalize” Korean food in foreign countries.

First lady Kim Yoon-ok has been an ardent advocate of the mission since she stepped into the Blue House.

“I’ve been so thirsty for work, and I’m so excited,” Chung said in a giddy voice after the foundation’s official opening ceremony last week.

Chung said that since he left the government, he has been traveling across the country to give speeches and meet with local farmers.

Chung noted that past efforts made under the slogan of globalizing Korean cuisine have been haphazard, with a series of ill-coordinated, one-off events created by government agencies and other organizations that have little in common.

“Globalizing hansik can never be achieved over a year or two. It is a long-term project that should be pursued step by step over decades,” he said.

The globalization of Korean food has become something of a mantra among culture and food-related policy makers here, but few have managed to well define exactly what that means, especially whether it means readjusting traditional Korean cuisines to suit the tastes of global consumers, or sticking to the country’s traditional flavors and working harder to convince the new consumers to give it a try.

And Chung said perhaps it is more important to explore where Korean tastes got their start.

“For now it is more important to establish the tradition and genesis of the Korean cuisines and our flavors. Then we need to find flavors that suit the tastes of global consumers,” he said.

“If we prioritize creating ‘fusion’ Korean foods from the very initial stage, we will never be able to outdo Japanese or Vietnamese food that has gone far ahead of us in that regard.”

Chung also said the new foundation will create standards on major Korean cuisines’ ingredients and cooking processes, and will give state certificates to Korean restaurants overseas that meet the standards.