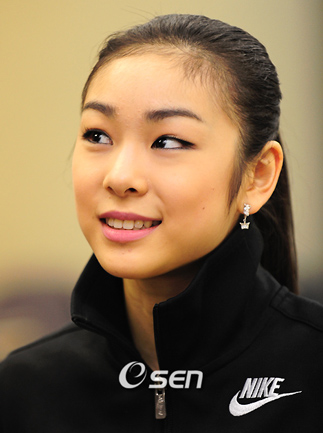 Olympic gold medalist Kim Yu-na won a silver medal at the World Figure Skating Championships in Turin on Saturday in her fourth consecutive podium finish at the competition.

Standing at seventh with a disappointing 60.30 points in the short program on Friday, the 19-year-old received an overall score of 190.79 at the Palavela arena to finish second after Mao Asada of Japan, who received 197.58.

"It's been a difficult season. I'm now happier than after the Olympics," said Kim, who wrapped up the season with four titles including the Olympic gold medal.

"Like all skaters, I have been looking forward to the end of the season before it gets started. Regardless of the result, I'm pleased that I have managed all the difficulties."

Kim received the highest free skating program score of 130.49 among 24 skaters, making a dramatic comeback to soar to second place from seventh.

Skating to Concerto in F by George Gershwin, she nailed a triple lutz-triple toe loop combination and went easily through spins and spirals that she missed in the short program.

But she fell on a triple salchow and missed a double axel at the end of the program.

The South Korean had tried to become the third woman figure skater in 20 years to win a world championship title two years in a row. Since 1990, only Kristi Yamaguchi and Michelle Kwan have accomplished the feat.

"At the official training session, I felt like 'I can't work well today.' I wasn't sure of finishing well," said Kim after the free skating.

"But I felt better after the six-minute warm-up prior to the competition."

Kim has won two bronzes and one gold in world championship tournaments since her debut in 2007. At the 2009 competition, she had earned 207.71 points, becoming the first woman skater to top the 200 mark under the current judging system.