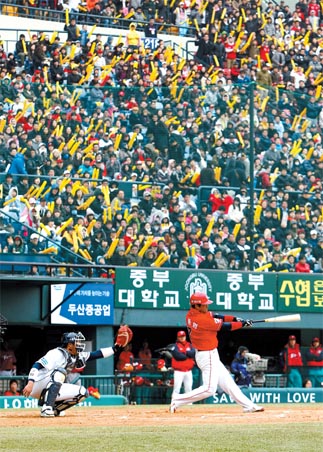 The Doosan Bears hosted the Kia Tigers in front of a sold-out crowd at Jamsil Stadium, southern Seoul, on Saturday. [YONHAP]

It was another sold-out affair as the 2010 Korea Baseball Organization season kicked off on Saturday with more than 90,000 fans packing stadiums in Seoul, Incheon, Busan and Daegu.

It was the second consecutive opening day in which all four of the games were sold out. The sellout opening in 2009 led to a single-season attendance record of 5.9 million by the end of the year.

If last year’s attendance is an indication of things to come, the current KBO season is off to a great start as league officials target attracting 6.5 million fans.

Despite the chilly spring weather, fans showed up early in hopes of getting their hands on tickets.

“As a retired manager, I came to the baseball game today as a fan and it feels great to see such a high turnout,” said former Hanwha Eagles and national team manager Kim In-sik in an interview at Jamsil Stadium in southern Seoul.

A new league record was set in the game between the LG Twins and Samsung Lions in Daegu. LG went with Edgar Gonzalez as its starter before using nine additional pitchers in a 7-5 win for LG that was decided in the 11th inning. The number is the most in a season opening game by a single team.

Samsung fielded seven pitchers in the game. The total of 17 total pitchers used in the game by the two teams surpasses the 14 pitchers used on the April 6 opening day game between SK and Hanwha in Daejeon in 2007.

In Jamsil, the Doosan Bears won their third consecutive opening game with an 8-3 victory over the reigning Korean Series winners Kia Tigers. Doosan’s Kim Hyun-soo, who was tabbed by many of his peers and experts as the most dangerous hitter in the KBO, had an impressive outing in which he went a perfect four-for-four at the plate.

“My goal is to reach 200 hits this season. However, that’s merely a goal and I will work toward getting the most hits possible this season,” he said.

The Nexen Heroes spoiled the Lotte Giants’ opener in front of its home crowd in Busan as it won 3-2 with the help of home runs from Kim Min-woo and Kang Kwi-tae.

SK Wyverns opened its season at home in Incheon with a 3-2 win over the Hanwha Eagles.