[Pinoy voices] In the throes of a cultural shift

[Pinoy voices] In the throes of a cultural shift 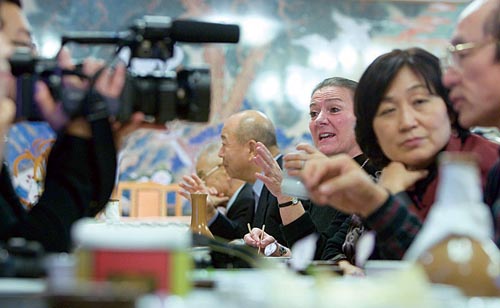 Transition. Every one of us went through one when we were delivered from the cozy womb to the outside world. And if we are to believe Freud, being a newborn is scary - at least before it gets exciting.

Korea has graduated to join the ranks of developed countries. This achievement is heralded in business schools and bars as well as in civic meetings and corporate gatherings. It has been touted to developing countries as a model for economic development.

Exciting, indeed. One needs only to travel through the larger metropolises like Seoul, Busan or Daejeon to see first-hand the country’s splendor and newfound wealth. To start with, the road networks connecting these cities and other places in the country are well-paved. The Korean cars on these thoroughfares are no longer replicas of their Japanese rivals, their makers having benefited from European automobile designers.

The tall apartments that abound provide clues to the traveller that the cities are becoming more affluent. Inside these buildings are flat-screen televisions, advanced computers with high-speed Internet connections and other technological marvels. On the road, if locals are not talking on their mobile phones while driving, they are fiddling with their MP3 players.

The model is Western at the core. Coffee shops have become popular places to gather. Fashion-wise, Korean women rival their counterparts in Italy, as they now only primarily don their hanbok, or traditional dress, during weddings and other special occasions. Some of them have even dyed their hair blonde, while others have had surgery to make their eyes look bigger.

For there is a stubbornness that is evident, a clinging to the past that makes the embrace of this new world and all its trappings a reluctant one. Amid the pre- and post-economic takeoff, there are certain areas of society that refuse to budge. And much of it is in the so-called softer and more abstract side of human and social interaction.

The siktang continue to serve a wide array of side dishes including kimchi and yellow radishes with the main meal. Despite a special E-2 visa for native English-speaking teachers from abroad, the Hangul alphabet has not been replaced with the English-adopted Roman script - unlike Vietnam, which has decided to abandon its own alphabet.

The transition has its clumsy moments as well, for both foreigners and locals. It is amusing to watch foreigners struggle with chopsticks, and even other Asians are quick to criticize the local versions for being metal and flat.

Owing to the configuration of vowels and consonants in every Korean syllable, locals pronounce English words ending in consonants with an extra vowel, such as “English-eeh.”

Unfortunately, it is more than clumsiness when one realizes its deeper implications. It is a clash of cultures. And it is tempting for an anti-imperialist mind-set like mine to stereotype this as an East-West conflict when it is probably a conflict between traditional and modern cultures.

In one of my earlier research projects here, I investigated the exasperation of Western businessman in dealing with their Korean counterparts. Vice presidents from both sides shake hands to seal a deal over dinner accompanied by soju, promising to get back to each other to iron out details. Later on, the Westerner is aghast that the deal has been vetoed because the company’s old guys upstairs did not agree with the previously assiduously prepared cost-benefit analysis that was deemed to be mutually beneficial by the handshaking VPs. It is not the changing of minds that irritates the Western executive but the silence from the other side rooted in a futile effort to save face.

Traditional culture holds sway in this country, even if the new breed of Korean is foreign-trained and educated. We can logically expect this to change over time. This will be over the long term, perhaps since traditional norms with respect to authority are hard to change.

In schools even today, students are expected to kowtow to their seniors. At home, while the women clamor for liberation, it is the mother-in-law who “trains” the daughter-in-law to recognize the husband’s higher hierarchical position. The point being made is that the youth, the women and others who struggle can only sit back and be amazed by the manner by which tradition locks in particular principles and beliefs no matter how unacceptable it is to the modern way. To top it all off, it is they who perpetuate these traditions.

Because the conflict phenomenon is not geographical, the struggle applies to peoples all over the world, more particularly to those from developing countries.

It is already a motherhood saying that we must accept what is good in the new and discard what is bad in the old. But it is culture that dictates what is good or bad, and these cultures are conflicting already.

I am not ready to give an answer, but I offer a question. Should we leave things to naturally evolve, or should we “break the cycle” more deliberately and identify what must be kept and what must be discarded?

*The writer is a professor at the Graduate School of Pan-Pacific International Studies at Kyunghee University and the chairperson of Phil-RPG.