Making use of reconnaissance

Making use of reconnaissance 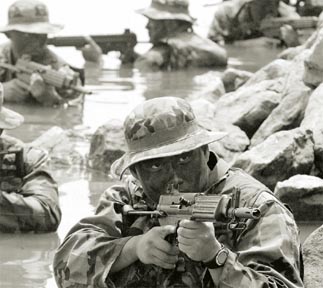 In general, South Korean reconnaissance units are formed in battalions and conduct missions to determine the enemy’s composition and location before the division to which they are attached moves or starts an operation.

They also identify targets for artillery and air attacks, coordinating them and directing fire by providing target information.

The units engage in special missions at the enemy’s rear, such as destroying command posts, communications facilities and ammunition depots.

At times, they capture or assassinate targeted key personnel. They also look for possible invasion routes of enemy forces and prevent potential attacks by laying ambushes there.

Recon units usually operate within a 20-kilometer (12.4-mile) range in front of their own divisions because within that distance they can receive artillery support.

Recon missions are usually divided into two types. One is reconnaissance in force, which mounts an offensive that will prompt a strong reaction by the enemy to reveal its strength, deployment and other tactical data.

General reconnaissance missions, on the other hand, are geared toward identifying possible ambushes by the enemy.