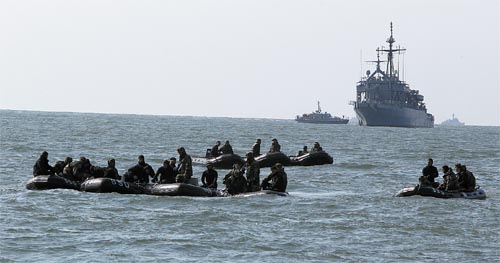 The search and rescue mission continued yesterday near Baengnyeong Island on the Yellow Sea after the Navy patrol ship Cheonan sank Friday night. Forty-six of the 104 crew members remained unaccounted for as of yesterday. [YONHAP]


The South Korean Navy rescue squad members continued yesterday to search for missing sailors from a patrol ship that sank Friday but failed to discover any new survivors. They were hampered by rough seas and poor visibility.

The 1,200-ton Cheonan had been on a patrol mission near the inter-Korean border of the Yellow Sea when an unexplained explosion tore the vessel apart. No cause of the sinking has so far been determined.

The patrol combat corvette carried a crew of 104. Fifty-eight were rescued by 1 a.m. Saturday. No additional survivors have been found despite rescue efforts throughout the weekend.

Four attempts by the military divers were made yesterday to reach the sunken ship, Col. Park Sung-woo, spokesman for the Joint Chiefs of Staff, said yesterday at a media briefing.

“Divers tried to reach the presumed spot where the stern half of the [split] vessel might be located at 8:27 a.m. and 12:19 p.m. but it was unsuccessful,” he said. “Also at 12:52 p.m. and 1:35 p.m., divers attempted the mission at the expected location where the front half of the ship went down but to no avail.”

According to the military, 86 divers and special rescue team members went into the waters, but they were able to stay out no more than four minutes due to extremely poor weather conditions. The depth of the waters where the ship sank was about 24 meters (79 feet), and the approximate distance between the two parts of the sunken vessel is four miles, Park said. “Three naval patrol vessels that were assisting the rescue mission have collected items believed to come from the sunken ship,” said Park. “A total of 39 items, including life vests and safety helmets, were found in nearby waters.”

While the military was able to locate the front half of the ship, the stern’s location is still unknown, Park said. The rear half of the ship was where most of the missing sailors were believed to have been located at the time of the sinking. It took about three hours for the ship to completely sink, the military said.

Defense Ministry spokesman Won Tae-jae said that the United States 3,000-ton salvation ship Salvo is scheduled to arrive this morning at the area of the sinking to support the search and rescue missions. Specially trained U.S. military divers will join the operations. 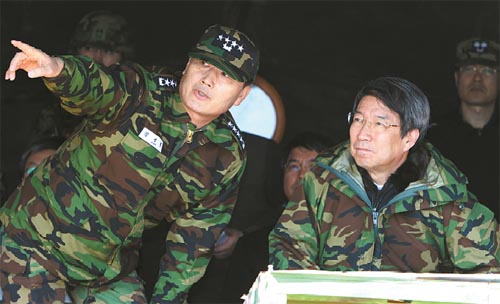 Prime Minister Chung Un-chan, right, is briefed about the situation as he visits the military unit on Baengnyeong Island, near the site of the sinking. [YONHAP]

During an emergency meeting with his security ministers and presidential aides, President Lee Myung-bak said the most important task at the moment is rescuing possible surviving crew members. Lee ordered the government and the military to focus on the search and rescue mission without losing hope, said Blue House spokesman Park Sun-kyoo.

Lee also said the incident should be thoroughly investigated and the cause should be explained fully to the public, Park said.

The military yesterday dispatched the 3,000-ton Gwangyang, specialized in rescue missions, and two mine hunting ships to the area. Private divers will also assist the rescue mission starting today at the request of family members of the missing crews.

While the military’s initial announcement on Friday said the Cheonan sank due to a hole in the bottom caused by an explosion, different testimonies came out from the rescued crew including the ship’s captain. They said the ship was split into two parts and went down quickly.

“It’s not something we can say clearly at this point,” Colonel Park told the media yesterday about the discrepancies in the military’s statement and the survivors’ accounts. “We can only say for sure after we salvage the ship.”

After visiting the disaster site on Saturday, Defense Minister Kim Tae-young told the press that the government is “yet to track down the exact cause of the tragedy. The vessel appeared to have been torn in half. But making predictions is meaningless in this situation, I believe.”

The Blue House and the military also refrained from making any comments that suggest North Korea’s involvement in the ship’s sinking.

Shortly after the Cheonan’s explosion, another patrol ship fired northward toward an unidentified target, but that target was later identified on the radar as a flock of birds, said Commodore Lee Ki-shik.