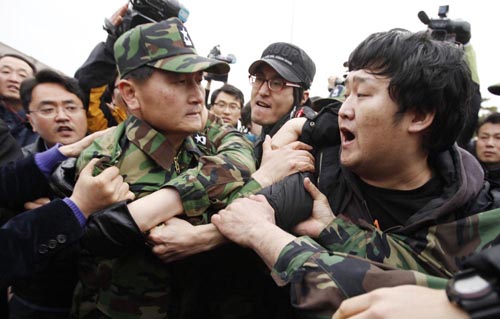 Families of the 46 missing sailors scuffle with a commodore after a briefing by Choi Won-il, captain of the sunken ship Cheonan, in Pyeongtaek on Saturday. [REUTERS/YONHAP]


Confused and enraged, families of the missing soldiers on the South Korean Navy corvette Cheonan demanded a clear explanation on exactly what happened to their loved ones on Friday when the vessel split in half after an unexplained explosion.

One of the most violent scuffles between the families and military broke out on Saturday at the Pyeongtaek Second Navy Fleet when a military officer pointed a gun toward family members who tried to enter the military base.

According to family members, some 100 family members of the missing sailors tried to enter the Pyeongtaek base at around 4:45 p.m. Saturday, when a military truck with seven or eight officials approached.

One official pointed a gun toward them, they said. Outraged, family members and the officials who approached them were involved in a physical fight for five to 10 minutes.

Tensions escalated when Choi Won-il, commander of Cheonan, showed up at around 5:25 on Saturday, in front of some 200 family members.

After giving his condolences, Choi said that the boat literally “sank within a second” and that his body jumped “50 centimeters up and then went down.” 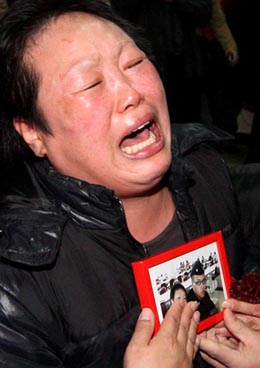 A mother of a missing sailor holding her son’s photo cries yesterday during a meeting with government officials. [NEWSIS]

Some family members shouted “you should be ashamed to come back alive” while others screamed, “Bring back my son alive.”

Along with President Lee Myung-bak, GNP members said that the first and foremost concern for military authorities should be to minimize casualties and to do everything they can to find the missing.

The mother of missing official Kim Jong-hun said that she used to be a haenyeo, or female diver, and asked the military to take her to sea to find her son. “I can’t stand to raise my grandson as a fatherless child,” she said.

Meanwhile, at around 8:30 p.m. on Saturday, 88 family members of missing sailors took off from Pyeongtaek on a military ship to visit Baengnyeong Island, near which the ship sank. Upon arrival at around 8 a.m. yesterday, the family members examined the rescue operation site and listened to official explanations.

Some family members expressed concern over the rescue team and said that it is “lazy” with the search and that it is unfathomable that the military wasn’t able to find the rear end of the vessel, which is suspected to hold the missing personnel. They urged rescue officials to do whatever they can to bring the soldiers back alive.

At the Pyeongtaek base where they are temporary staying, other family members of the missing said they plan to create a committee to examine the matter.