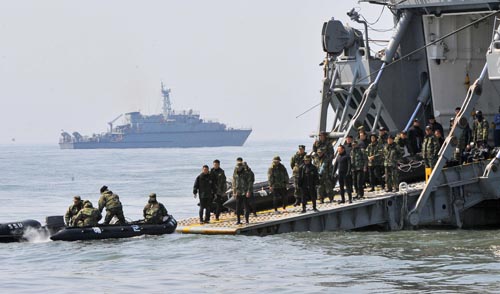 A South Korean Navy team conducts a search mission for the Cheonan in the Yellow Sea yesterday. [Joint Press Corps]

One mile southwest off Baengnyeong Island, a South Korean navy warship called the Cheonan sank during a patrol mission in the Yellow Sea. A strong explosion near the ship’s rear shook the entire vessel, and after only two minutes the stern of the ship was sheared off.

Twenty minutes later, 60 percent of the ship was underwater, and after three hours, the ship had sunk completely. Forty-six of the 104 crew members onboard are now missing.

The Korean Navy has been successfully defending the maritime Northern Limit Line from threats by North Korea, including three pre-emptive strikes in the past. The explosion - or implosion, the cause is unclear - occurred during a patrol mission to defend the sea border, and as a former naval officer, I pay my deepest respect to the patriotic souls and devotion of the crew members who are still missing in the cold sea.

Considering the size and weight of the ship, the marine conditions in winter and the strong currents between islands, it is likely to take quite some time until the exact cause of the explosion and sinking are clarified for the 1,200-ton Cheonan, which is 88 meters (289 feet) long, 10 meters wide and 25 meters high.

Based on my 34 years of experience with the Navy, which included years that I captained a patrol boat, and my research at the Korea National Defense University, as well as the facts revealed so far, I analyzed the following three possible scenarios for the tragic incident.

First, the boat’s explosion could have been caused internally. A patrol boat is loaded with various flammables and munitions such as ammunition, torpedoes, bombs and missiles, and fire, an electrical short or fuel vapor could have ignited and sparked the flammables, leading to a series of explosions.

Second, the explosion could be linked to North Korea, or an internal mole might have caused a fire or attached an improvised explosive device on the explosives.

Third, the patrol boat may have collided with a rock. At the time of the explosion, the Cheonan was close to Baengnyeong Island, a location that poses the possibility of collision.

However, even if the ship had crashed into a rock, it’s unlikely it would have sunk so quickly, and the rear of the boat would not have been torn off. Therefore, the third scenario is not likely.

If we look at the possible involvement of North Korea, we can think of a torpedo or mine attack from a submarine or a disguised merchant vessel.

Pyongyang has vowed to retaliate for its defeat in the Battle of Daecheong, and North Korea could have studied the operation pattern of the South Korean ships to stay close to the island. A North Korean submarine may have hidden near the island and fired a torpedo to the rear of the ship. When a torpedo approaches from the rear, sonar cannot detect the acoustics of the torpedo.

Also, we cannot rule out the possibility of a mine attack since North Korea has conducted submarine mine drills in the past and the explosion was powerful enough to puncture the ship instantly. Mines can be ignited by various triggers, such as noise, magnetism, pressure, sensors or a combination of these factors. A mine can be anchored at the sea bottom and the explosive can be placed in the middle of the water, so the explosion can happen at the middle or rear of the ship.

Lastly, North Korea could have used a civilian vessel or a submarine and fired a missile at the rear of the ship. However, there is no report of North Korean vessels passing around the Cheonan at the time, and this possibility is very low. The direction the steel plates bent as a result of the explosion would provide a critical clue to determine the cause.

Whatever cause is revealed, the aftermath will surely be serious, so we must investigate the case prudently and thoroughly. It is certainly regrettable that the Navy operated the ship so close to the island and exposed its vulnerability, and that there are 46 crew members missing despite the three hours between the explosion and the sinking of the ship. The government must use all means to rescue the missing crew members and provide honest progress reports. Also, the surviving families should be sincerely consoled and properly informed of the status of the investigation to prevent added pain.

Moreover, the Navy has to learn from the tragedy and thoroughly analyze the problems to reinforce its vulnerable points as well as prevent tragedies in the future.

The Navy should replot the standard patrol routines. The Ministry of Defense should spare no investment in the education and training of soldiers so that they are equipped with flexible and creative mind-sets to respond to unforeseen situations.

Until the cause of the tragedy is clarified, the government needs to reinforce communication with citizens to relieve concerns about the military as well as anxiety about national security.

*The writer is a former professor of the Korea National Defense University.
Translation by the JoongAng Daily staff.