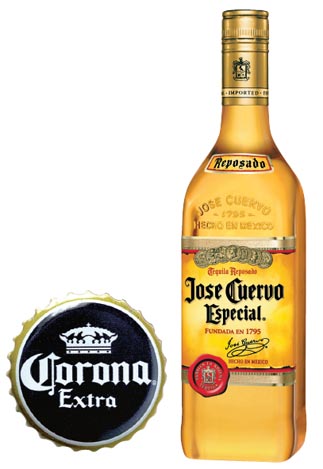 Some of Mexico’s most recognized exports to Korea are alcoholic beverages including Corona beer and Jose Cuervo, the No. 1 tequila in Korea. Provided by JoongAng Ilbo, Pernod Ricard Korea

Perhaps the biggest common factor in the economies of Korea and Mexico is that they are both heavily dependent on exports. In fact, more than 90 percent of Mexico’s trade is under various free trade agreements with more than 40 countries.

To this day, the deal that’s had the most impact on the Mexican economy is the North American Free Trade Agreement signed by the United States, Canada and Mexico, which came into effect in 1994.

A similar trade deal with Korea, however, is still in the works. In September 2005, former President Roh Moo-hyun visited Mexico and agreed to go forward with a bilateral trade agreement called the Strategic Economic Complementation Agreement, or SECA. Compared to a full FTA, which makes trade liberalization possible on a broader scale, the SECA lowers tariffs on select sectors.

However, as trade talks stagnated, the two countries decided to negotiate instead for a full free trade agreement in 2007. Last month Korean Foreign Minister Yu Myung-hwan met with his Mexican counterparts to discuss the possibility of pushing the Korea-Mexico FTA forward. The deal has been stalled mainly due to opposition from Mexico’s manufacturing sector, in particular from automakers.

The trade volume between Korea and Mexico has climbed since the late 1990s and by 1999, Mexico was Korea’s top exporting country among all Latin American nations, according to the Korea Trade-Investment Promotion Agency.

Top Korean items imported by Mexico include liquid-crystal devices, color TV parts and auto parts, according to the Korea International Trade Association. Hyundai Motor, for example, exports cars to Mexico in collaboration with Daimler AG, whose small-sized cars do well in the Mexican market.

Some of the most recognized consumer product imports from Mexico in Korea are alcoholic beverages including tequila and beer brands such as Corona. Popular Mexican tequila brand Jose Cuervo, in fact, takes up more than 70 percent of Korea’s tequila market share, according to Pernod Ricard Korea, the company that imports the brand in Korea.

“Korea’s tequila market has been growing an average 15 percent yearly since 2000 and the unrivaled No.1 premium tequila in Korea is Jose Cuervo Especial,” said Yoo Ho-sung, public relations manager at Pernod Ricard Korea.

Lee Jong-seo, an employee for Mexican carrier AeroMexico operations in Korea, says that interest in Mexico among Asian countries is rapidly growing. “Although an exact number is hard to estimate, a maximum 10,000 Koreans visit Mexico per year,” he said.

Korean investment in Mexico has also been on the rise since Nafta.

Mexico experienced a double burden last year when, along with the aftermath of the global economic crisis, it also saw an outbreak of the H1N1 flu that affected the economy.

“With the H1N1 flu, Mexico’s unemployment rate soared, the cost of living rose rapidly and economic growth faltered,” Kotra said in a statement.

Mexico’s economy shrank 6.8 percent last year - the worst fall in around 30 years, according to the country’s treasury department.

Experts predict, however, that Mexico’s economy will recover starting this year. “Since the global economic crisis in 2008, Mexico’s main industries, including manufacturing and oil exports, have been down. We expect the country’s economic growth will start to recover in the first quarter of 2010,” said Kotra.