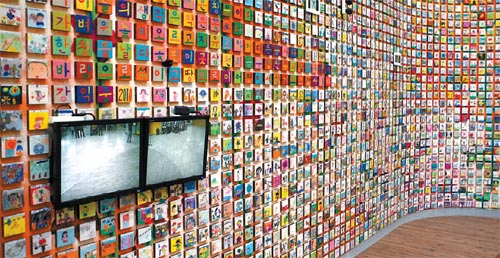 The “Wall of Hope,” a mosaic-like installation by artist Kang Ik-joong, is on display at the Chungnam National University Hospital. Provided by the hospital


If there’s one thing common to hospitals all over the world, it’s their reputation as drab, cheerless places not at all designed to sooth and heal.

That’s been changing. Rather than endless gray corridors filled with chemical smells and intimidating medical equipment, many hospitals are brightening their wards with artwork and daily concerts in an effort to lift the spirits of their vulnerable patients.

And the benefits extend from the mind to the body. Studies show that listening to, watching or otherwise participating in any form of art supports the healing process. Increasingly, drawings, photographs, sculptures, concerts and plays are becoming an integral part of a hospital’s treatment.

“People get gloomy when they see hospital patients in agony,” agrees Heo Won-sil, a dentist and a director of a gallery at the National Medical Center.

“Concerts or artworks provide more than just comfort to patients, especially the ones who are forbidden to go outside.” 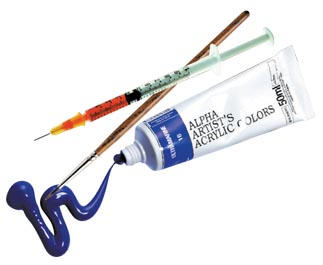 The Chungnam National University Hospital took that wisdom to heart. Last month, it installed Kang Ik-joong’s “Wall of Hope.” The world-renowned 50-year-old Korean American artist is best known for mosaic-like installations made up of three-by-three inch squares of storytelling canvases, and the “Wall of Hope” is a 3,000-piece mosaic whose pieces were drawn by the hospital’s youngest patients, as well as kindergarten and elementary school students in Daejeon and children in the United States, Japan and even Croatia. Kang donated the piece to the hospital in cooperation with the Yanghyun Foundation, a nonprofit organization that helps hospitals throughout Korea.

Korea has only recently added art to its hospitals, but art and medicine have long converged in Western hospitals. For the past two decades, professional organizations have been working with hospitals around the world to transform the atmosphere.

The Foundation for Hospital Art, established in 1984, is one of the nonprofit organizations that work around the globe giving comfort and hope to those who suffer in hospitals by providing artwork at no cost to hospitals. The foundation holds programs allowing patients to create their own artworks with the help of a professional artist. So far, it has worked in about 1,500 hospitals in 178 countries, creating more than 30,000 works of art with at least 90,000 different patients.

Japan also made an early start in adopting hospital art. A decade ago, the nonprofit organization Art Project began working with hospitals and gaining ground in the Osaka region. There, hospitals are slowly transforming to what they say is “a place you want to stay.”

Experts predict that the meeting of art and medicine will become more active in Korea.

“These days, a growing number of hospitals in Korea are installing three-dimensional artworks to improve the hospital atmosphere, which can be stressful to the patients,” says Yang Nae-won, a vice president of the Korea Institute of Health care Architecture and also an architecture professor of Hanyang University.

He predicts that “hospitals using art to better their environment will definitely proliferate as more hospital leaders are realizing that a pleasant, efficient environment reduces stress and improves care.”

While hospitals in Korea were a little slow in picking up the trend, they’ve made up for lost time. Children’s hospitals around the nation started decorating their wards and corridors with their patients’ drawings and designs a decade ago.

And at other hospitals, the decor is not limited to children’s drawings - it’s become professional. 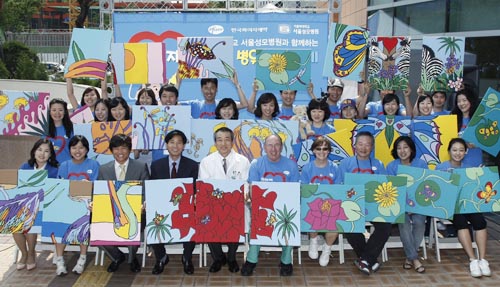 The sounds of solace

Music is one art form with proven therapeutic benefits; it was recognized as an effective facilitator of healing long before art entered the wards. Research at the Children’s Hospital of Philadelphia in the United States found that listening to or making music facilitated positive self-esteem among hospitalized patients, and provided peer interaction and a sense of community within the hospital environment.

Korean hospitals have taken note. At some, musical therapy is part of almost every treatment.

Since its establishment in 2003, Seoul National University Bundang Hospital has held concerts ranging from the Western classics to gugak, Korean traditional music. The concerts are so good that even people with no need of medical attention have been known to visit, just to lend an ear.

Pianist Chung Bo-mi, who herself has faced illness and twice underwent kidney transplants, volunteers at the hospital with the group Duo Gloria.

“There’s nothing I want than more than to hear that patients received consolation and strength through my music,” she says.

At the Konkuk University Medical Center, the “Piano Garden” hosts small lunchtime concerts every day, on the same floor where a gallery displays and sells more than 80 works of art by celebrated artists (one is priced at 100 million won, or $88,000). And the Ewha Womans University Cancer Center for Women formed its own 20-member group, Iyuhoe, which sang Korean songs to patients at an open concert at the center last year.

“I can’t find words to describe the feeling of presenting our hopes and dreams to other patients as we sang. But to be honest, we also really enjoyed gathering together and practicing twice a week for a month,” says Lee Kyong-ok, who leads the group, each member of which is a breast-cancer victim.

“Being with those who share the same pain and the feeling of joining forces in a concert was incredible,” agrees one Iyuhoe member. 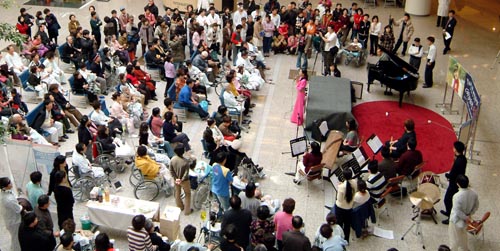 Seoul National University Bundang Hospital has transformed its lobby into a concert hall. Provided by the hospital

A thread of hope

The increased attention to patients’ comfort takes in the smallest detail - down to the gowns worn by patients, many of which can make even a healthy person look sick.

At the Human Medical and Intervention Center in Jamwon-dong, southern Seoul, which was established in 2008, “green designer” Lee Kyoung-jae has come up with a gown that is beneficial to both patients and the environment.

Initially, the hospital asked Lee simply to design a gown that was aesthetically attractive. But as she researched patient gowns, she decided to use nettle to create an environmentally friendly garment.

“Most patient gowns at hospitals use cotton and polyester, which meant that hospitals - places where patients come to be treated - were dressing their patients in chemically treated clothing,” the designer said.

Nettle, which has a long history as a clothing fiber, had fallen out of popularity after World War II. But she found that the fabric is known not only for its durability, but for its ability to purify the air. In the last several years, it’s been in the spotlight in Europe because it causes less environmental pollution.

“The cost of producing nettle-fabric patient gowns was five times higher,” Lee says. “But after six presentations in a month, and with foreign studies to back up my assertions, I was able to persuade the hospital to go with the environmentally friendly gown.”

But at most hospitals, the main focus remains on the works of art.

Chung Chin-Youb, the director of the Seoul National University Bundang Hospital, says the facility has been making efforts to transform itself into “something unlike a hospital.”

“Many patients are threatened by the dreary atmosphere of hospitals. Those who are hospitalized for prolonged stays often feel isolated and lonely. I want those patients to forget they’re in a hospital - at least when they are listening to a concert or viewing artworks,” Chung says.

At other places, patients not only have the chance to view the art - they help make it. Experts say that when patients draw, their attention is drawn away from their illness, helping facilitate their cure.

Patients at the Chungnam National University Hospital line up at the fourth-floor lounge for a monthly event called “Drawing Pictures with Artist Park Seok-shin.” Park not only draws with the patients, but talks to them about their works. As patients draw on a white canvas, Park initiates small talk and puts finishing touches on their pictures, transforming them into masterpieces.

He says the volunteer work is so rewarding he can’t help but make time for it, despite his busy schedule.

“Every time, I get to see their facial expressions change from blue to bright,” Park said.

According to Kwon Hak-joong, a pediatrician, “Workshops with the artists relieve anxiety and stress about being in a hospital.”

The hospitals’ new look often is a cooperative effort not just between patient and artist, but between Korea and America.

Korea Pfizer pharmaceutical company, together with The Foundation for Hospital Art of the U.S., has staged the “Power of One” at three hospitals per year since 2002. In this program, patients, artists, doctors, nurses, other caregivers and volunteers work together for two days to produce one great wall painting. A blank canvas is installed at the entrance of the hospital and anyone who goes in or out can help paint - and because the paints are environmentally friendly, even children with leukemia can lend a hand.

Chung Da-jeong, a section head at Korea Pfizer, says that one woman in her 70s helped paint for the whole two-day period, even though she hadn’t been able to hold a brush for 20 years.