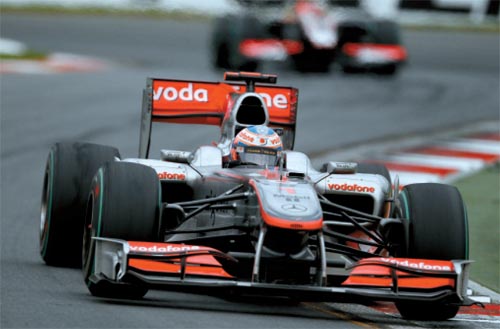 McLaren driver Jenson Button of Britain in action during the Australian Formula One Grand Prix in Melbourne on March 28. [AP/YONHAP]

MELBOURNE - Jenson Button survived a first-corner collision and successfully gambled on a bold tire strategy to win a thrilling Formula One Australian Grand Prix on Sunday.

Button, racing for McLaren, was the first driver prepared to change from intermediate tires to slicks on a drying track, and drove the final 52 laps on a wearing set of soft tires to claim back-to-back wins in Melbourne.

The 2009 world champion tangled with Ferrari’s Fernando Alonso at the first corner, and inherited the lead just before half distance when pole sitter and race leader Sebastian Vettel ended up in a gravel trap after the brakes on his Red Bull failed.

Renault’s Robert Kubica was 12 seconds behind in second place, driving doggedly to hold off faster rivals and finish ahead of Ferrari pair Felipe Massa and Alonso. The top four drove most of the race uninterrupted on one set of tires, while their rivals behind them elected to stop for fresh rubber.

Boldest of all was Button, who changed to slicks when the track was still damp, carefully navigated while he got heat into his tires, and was rewarded with a victory in just his second race with McLaren, having won the world title with Brawn GP last year.

“It was the right call, and I am very happy.”

If fortune favored the brave Button, it entirely deserted Vettel, who for the second race running was let down by a mechanical failure while comfortably leading a grand prix. He has just six championship points - and Red Bull has 18 - meager reward for the car that had proven itself to be the quickest in the early part of the season.

“I don’t know in general pace where we would stand,” Button said. “But that’s not all that racing is about; it’s about strategy, it’s about thinking and it’s about conserving and we did it correctly today and we came away with a good victory.”

Among those who were called in for a new set of tires was Button’s McLaren teammate Lewis Hamilton, who fumed at the decision postrace, saying his team’s strategy call cost him at least a second-place finish, if not victory.

“I drove my heart out today and I deserved better,” Hamilton said. “The strategy was not right. Everyone else in front of me did one stop and I did two.”

The British driver, who had a horror weekend that included being pulled over by police for dangerous driving in a private car near the Albert Park circuit, then a woeful qualifying performance, had moved up to third from 11th on the grid in the middle stages before pulling in for the new tires.

He never regained that podium slot, and was bumped from fifth down to sixth by a collision with Red Bull’s Mark Webber on the next-to-last lap.

Webber briefly led his home race, but paid heavily for being the last of the leaders to change to dry-weather tires. He was shuffled back in the early pit stops and finished ninth, behind Force India’s Vitantonio Liuzzi in seventh and Williams’ Rubens Barrichello in eighth. Seven-time world champion Michael Schumacher took the final point, finishing 10th for Mercedes.

Alonso leads the drivers’ standings with 37 points. Massa has 33 and Button 31.