Storytellers who ruled the world

Storytellers who ruled the world 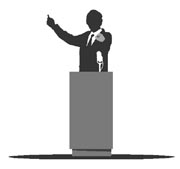 Master storytelling and master the market. That was the conclusion that University of Illinois economist Deirdre N. McCloskey made after studying the rhetoric of persuasion in the field of economics.

In her 1999 thesis, she found that 28 percent of the U.S. gross domestic product is related to persuasion for commercial purposes, such as publicity and marketing. McCloskey asserted that in the same year, persuasive storytelling accounted for more than $3 trillion of the GDP.

Storytelling in this sense means telling an exceedingly well-thought-out story to sell a product. While McCloskey conducted her research more than a decade ago, we can be sure that persuasive storytelling is just as important in today’s market.

One of the most famous cases of well-executed persuasive storytelling is the 1984 TV commercial for Apple’s Macintosh computer. Based on George Orwell’s dystopian novel “Nineteen Eighty-Four,” the commercial showed a woman being chased by security guards. She runs toward a large screen showing the face of “Big Brother” and hurls a large hammer at the screen. The frightening image is destroyed and the commercial ends with this text: “On January 24th, Apple Computer will introduce Macintosh. And you’ll see why 1984 won’t be like 1984.”

The powerful story that Apple told in that commercial won the computer company many sales and the advertising agency which developed the ad a half dozen awards.

Politicians and kings have long understood the power of storytelling in guiding their people.

Two millennia before Apple, Jesus used stories to teach his followers lessons. In the Bible, a man told Jesus that he could not treat patients on the Sabbath because it was against the commandments. However, Jesus replied by telling a story of a lamb that was lost on the Sabbath. Because the lamb was in danger of being eaten by wolves, the shepherd went searching for his lost lamb, despite the prohibition on working during the Sabbath. Therefore, Jesus concluded that since humans were more important than lambs, we must take care of people whenever they’re sick.

U.S. President Barack Obama, who recently oversaw the passage of a health insurance reform bill, is known as a great orator. While campaigning for the bill, he frequently told Americans about his mother’s struggles with ovarian cancer. At a time when she should have been focusing on her health and family, she had to constantly fight with her health insurance company to cover her health care bills. By personalizing a decisive issue that involves billions of dollars, Obama was able to win the hearts of Americans and votes of congressmen.

While storytelling can be used to sell a product, it can also be a catalyst for social change. I hope that politicians use the tool wisely.