Old mine could have sunk warship

Old mine could have sunk warship 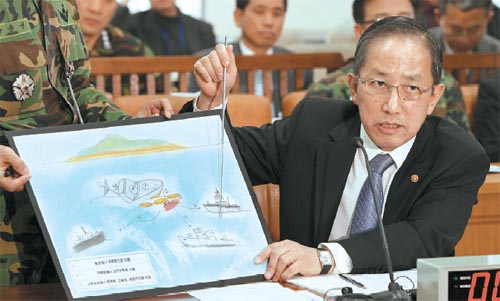 Defense Minister Kim Tae-young, right, gives a briefing on the operation to rescue the sunken ship yesterday at the Defense Committee of the National Assembly. [YONHAP]


While the cause of an explosion that sunk the navy patrol boat Cheonan remains to be determined, speculation grew further in Seoul yesterday that the 1,200-ton ship hit an external object, possibly a North Korean mine left over from the Korean War.

Defense Minister Kim Tae-young told lawmakers on the Defense Committee of the National Assembly that, based on survivors’ accounts and their injuries, the incident was likely caused by a great shock from outside. Kim played down the possibility of an internal explosion. “I don’t think the government and the Ministry of National Defense had ever denied North Korean involvement in this incident,” Kim said, making clear that the possibility is still alive.

Asked if the explosion was caused by a North Korean mine, Kim said there was a chance. However, he dismissed speculation that the ship was hit by a torpedo.

The minister said North Korea had imported about 4,000 mines during the Korean War from the Soviet Union. “Of them, 3,000 were placed in the East and Yellow seas,” he said.

The minister also said the military did an intense search to remove any leftover mines in 2008. He also said no mines were placed in the area by the South Korean military, dismissing the idea that the ship could have been sunk by the South’s explosives.

Asked if the Navy had detected any sign of torpedo activity before the explosion, Kim said that “according to a sailor who operated monitoring equipment on the sunken ship, no such sign was detected.” The minister, then, added that “detection of mines, however, is limited.”

Military sources said mines, if they actually existed near Baengnyeong Island in the Yellow Sea, could have been placed through a secret operation by a North Korean submarine, in addition to being leftover from the Korean War.

The defense minister yesterday dismissed the possibility that the North had attacked the Cheonan directly. Kim told lawmakers that “there was no sign of an attack from the North. About 15 ships were around the sunken boat at the time, and all radars on nearby islands were operating. Judging from all available evidence, there was no sign of a North Korean attack.”

Military specialists also dismissed the possibility that depth charges inside the Cheonan had exploded, because such an explosion requires assembling detonators and wetting them with salty seawater.