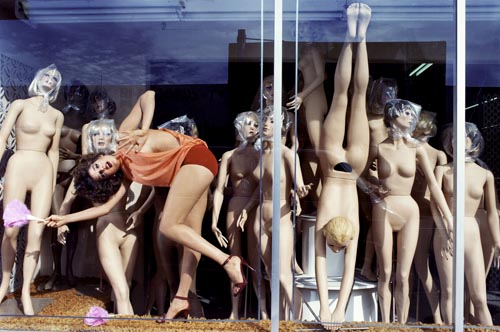 An exhibition featuring photographic and video works of the late avant-garde French photographer Guy Bourdin kicked off on Monday at 10 Corso Como, a fashion spot in southern Seoul that is a branch of the Milan-based company.

The legendary artist, often called an “innovator of fashion photography,” gained worldwide fame for provocative advertisements for his commercial clients, in fashion in particular, over a period spanning the 1950s through 1980s.

He rubbed shoulders with contemporaries such as Richard Avedon and Helmut Newton before passing away in 1991 at age 62.

In Paris in 2008 - 17 years after his death - a collection of the artist’s video works was shown to the public after his son Andrew’s longtime efforts to collect pieces that had been scattered around the world, according to exhibit curator Shelly Verthime.

Seoul has been chosen as the second destination for the exhibition as Cheil Industries, Korean operator of 10 Corso Como, is celebrating the second year of the high-end multibrand fashion boutique’s presence here. The next stops for the show will be Shanghai and Beijing.

The exhibition, being held for free through May 2 from 11 a.m. till 7 p.m. every day at the 10 Corso Como building in Cheongdam-dong, features Bourdin’s cinematic achievements in a panoramic projection encompassing the 1960s through the 1980s. The films range from his studio fashion shoots, to his work process and his favorite shooting locations.

The exhibition also includes an installation work surrounded with a visual setup of mirrored rooms magnifying elements of his works including camera obscura images, a box and fractions.

Some 75 photographs on display are from the artist’s two-volume photo compilation book “Guy Bourdin: A Message for You,” which presents his French Vogue editorials and advertising campaigns for Charles Jourdan, Pentax and Versace.

Nicolle Meyer, Bourdin’s muse in the 1970s, also helped to curate the Seoul exhibition. She posed for the artist from 1977, when she was 17 years old, until 1980 and appeared in Charles Jourdan campaigns 30 times. “Nicolle was an integral part of his vision. She was his canvas. She comes and goes, appears and disappears - always different but always the same. She gave Bourdin the freedom to dream and think,” wrote Alber Elbaz, designer of the fashion house Lanvin, in the introduction of A Message for You. In a talk with the Korean and foreign press, Meyer said she was privileged to have worked with a man of such inspiration and genius.