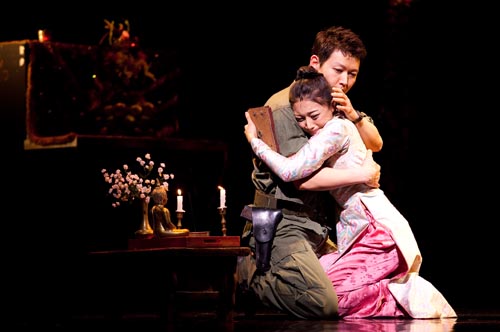 The “wedding” scene between Chris and Kim shows their very brief love affair. Provided by KCMI

It’s a story as old as warfare. Impoverished local girl meets foreign soldier. Girl and soldier fall in love. Girl is seduced, and then abandoned.

But if a twice-told tale, it’s still one that speaks to audiences. “Miss Saigon” touched a chord with Americans still smarting from the Vietnam War. And because Koreans have acted both roles in the story - as needy locals during the Korean War and foreign soldiers in Vietnam - the musical can be expected to play with equal resonance here.

Miss Saigon, which is based on Puccini’s opera “Madame Butterfly,” is a musical with many levels centering around an impossible love story. Kim is a Vietnamese girl who has lost her family in a devastating bombing. Chris is a U.S. solider who has lost sight of the meaning of life amid the violence of the war. They meet at the seedy nightclub in Saigon where Kim works, and share two blissful weeks.

The club itself is a metaphor. Its name, Dreamland, hints that it is a haven for American soldiers out to forget their troubles, but it also represents the hopes of the girls who sell their bodies for a golden lottery ticket - the chance that a soldier will fall in love with them and take them back to America.

At Saigon teeters on the brink of collapse, Kim becomes pregnant. Chris promises to take her to the United States, but they get separated. Chris searches for her for more than a year, but finally marries another.

So Kim decides her own fate and that of their son in a scene that is meant to show that a mother’s love surpasses anything.

It’s a standout. And the production had musical fans raving even before the opening act.

One of the reasons for its success may be due to the emotional attachment Koreans have to this issue. During the Korean War, Korean women were subjected to the same treatment as the women of Dreamland; in Vietnam, it is no secret that Korean soldiers also took advantage of the local women. And indeed, the first Korean production of Miss Saigon, in 2006, filled more than 80 percent of its seats during its run in Seoul and more than 90 percent of the seats in the cities of Daegu and Gimhae.

Another reason may be the strength of the performances, in particular that of Kim Sung-gi as the wily Engineer, the character who rescues Kim from Saigon’s streets only to put her to work at Dreamland.

This personification of capitalism does everything in his power to escape from the encroaching regime, believing that he can make lots of money if he could just set foot in the land of the free.

The Engineer is both an ideological and satirical take on the American Dream, and the chance to play him is itself something of a dream come true for the actor. Kim was originally slated to take the role of the Engineer in 2006 but had to step down after suffering a stroke.

“I was so touched when the producers came and asked me to audition for Miss Saigon again,” said Kim. “As an actor, being on stage as the Engineer is like leading a second life.”

Miss Saigon has always been a lavish production, but it’s been tweaked here to make it even more extravagant.

One change is to the grand-scale special effects. Due to the limited size of the stage when the show was produced here in 2006, eye-popping scenes - such as the roll-out of a 1950s Cadillac for the Engineer’s “American Dream” scene and the video footage of a U.S. army helicopter - did not have the same feel as in other productions overseas.

This year, producer Cameron Mackintosh stepped in and designed a special set to give Korean fans the excitement of the overseas productions.

In addition, the translation has been streamlined for better fluency in Korean, and with the reworked script, the 2010 Miss Saigon is ready to wow Korean audiences again.

*The musical will be presented at the Goyang Aram Nuri Art Center through April 4, then it moves to the Seongnam Art Center from April 16 to May 1, and finally to the Chungmu Art Hall from May 14 to Sept. 12. For more information, visit www.miss-saigon.co.kr.