Fields of glory, fields of sacrifice

Fields of glory, fields of sacrifice 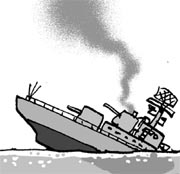 For Genghis Khan’s Mongol soldiers, who conquered the world riding on horseback, it was their armor that set them apart. It had a thick front but the rear was thin, so that soldiers wouldn’t be tempted to run away from the enemy on the battlefield. They fought ruthlessly, wielding axes and swords at whatever battles they fought.

That is not to say that Genghis Khan didn’t value the lives of his subordinates; he regarded them as his most important strategic asset. On the battlefield, he prohibited his soldiers from talking about death. Even mentioning the names of comrades who were killed in battle was not allowed. All Mongol soldiers fought with firm conviction that no one could hurt them and they would never die, according to Jack Weatherford who wrote “Genghis Khan and the Making of the Modern World.”

Vice Adm. Horatio Nelson, the greatest naval hero in the history of Britain, was a commanding officer who never ignored the sacrifices his soldiers made. When he was promoted to a high-ranking officer, he overheard a soldier complaining that since soldiers had a higher probability of being hit by enemy gunfire, their share of the spoils of war should be bigger than that of their superiors.

After much consideration, Nelson started to expose himself to higher risks as well. He crisscrossed the deck of his battleship in fierce battles, wearing colorful uniforms decorated with glittering medals. Following Nelson’s brave example, his soldiers fought with the firm determination of those who have dedicated their lives to the nation. The glorious victory at the Battle of Trafalgar was won as a result of that courage. And while Britain did not lose a single warship, it lost a hero: Nelson, an easy target of enemy snipers, was fatally shot during the battle.

Because sacrifice, however hard one may try to avoid it, is inevitable in war, there is no such thing as a “good” war. When the Duke of Wellington returned home from the battlefield, he always prayed to God, wishing the battle would be his last. Although he had been victorious at the Battle of Waterloo, he felt sorry for the sacrifices made by his subordinates. He famously said, “Nothing except a battle lost can be half so melancholy as a battle won.”

Though we forget so easily that the war is not yet over on the Korean Peninsula, a lot of soldiers are still risking their lives, engaged in a war against North Korea. The sinking of the Navy patrol ship Cheonan on Friday, following the clash with North Korean vessels in the Yellow Sea on Nov. 10, 2009, was yet another example of that.

Regardless of the actual cause of the incident, the Cheonan’s sailors met tragedy while trying to safeguard the nation. The loss of life among our soldiers needs to be minimized. When will the war on this land end, and how much more blood will be shed?