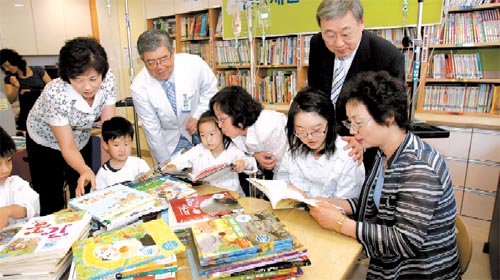 Doosan Chairman Y. H. Park looks at books donated by the Yonkang Foundation to the children’s hospital school at Severance Hospital in the Seodaemun District.

Doosan Group’s social work starts with the Yonkang Foundation. The foundation was established in 1978 by Park Too-pyung, the group’s first chairman, with under the motto: “Education is the driving force of national development.” Since its launch, the Yonkang Foundation has provided support for research, overseas training for teachers and books, and it also operates the Doosan Art Center.

The foundation’s customized academic support is one of its strongest suits, especially its environmental research fund. Yonkang has supported research by 10 professors of environment, safety and related fields, and last year gave 100 million won ($88,000) to the Catholic University of Daegu Department of Environmental Science. The resulting thesis has been distributed to universities, libraries and major researchers.

The opportunity for teachers to visit the Goguryeo remains in China and Baekje remains in Japan began in 1989, aiming to help teachers provide their students with accurate historical perspectives. As of 1989, the Foundation had helped 1,813 teachers visit overseas.

Beginning in 2007, the Ministry of Education, Science and Technology and the National Research Foundation of Korea have given the Science Teacher of this Year award to outstanding elementary, middle and high school teachers, and the winners have been given the chance to visit scientific institutes in Korea as well as overseas. In January, 35 teachers visited the Changwon Industrial Complex and advanced science museums in Japan, and 141 teachers have been able to take part in the program to date.

Doosan Group’s social contributions are designed according to their beneficiaries.

The books donated by the Yonkang Foundation are chosen based on a lists of requests from the teachers and students who will be using them; 100 elementary schools in remote areas and 27 children’s hospitals have received a total of 68,841 books.

The Doosan Arts Center operated by the Yonkang Foundation stands in front of an establishing cultural infrastructure for artists. Last year, the “Doosan Residency New York” kicked off by providing a studio and apartment in New York in which young artists can live and present their pieces on the world stage, working together with famous curators, analysts and galleries. The Doosan Gallery New York, which opened in July, is a stepping-stone to the international art world.

Y. H. Park, the chairman of Doosan, remarked, “To become a true global and respected company we should meet our social responsibilities and actively take lead in the fluctuating economic situation, rather than reacting passively.” Doosan has been reinforcing its social contribution work and systematically organizing its volunteer system.